Shocking New Poll Has Some Bad News For Justin Amash 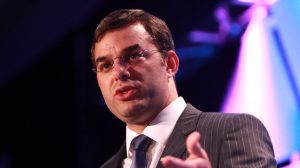 Rep. Justin Amash just got some fairly bad news from a brand spanking new poll that was just released, showing that in his district, the support has swung to his very pro-Trump primary challenger.

There’s no doubt this is a response from the people in his area after comments Amash made about supporting the impeachment of President Trump, a move the libertarian is probably going to deeply regret.

The poll from MIRS News Service showed Amash at 33 percent, with Lower at 49 percent.

On Wednesday, Amash again parted with Republicans and voted with Democrats on an otherwise partisan motion to hold Trump administration figures in contempt.

The vote passed 24-15 with only Amash crossing party lines to join the Democrats.

Amash told Fox News that he didn’t feel the excuses from these individuals were legitimate and decided to stand by what he believes. He went on to say that he’s not in Congress to vote solidly with one party or the other, but to follow the Constitution.

Regardless, if he isn’t careful how he proceeds, he’s going to find himself ousted from office and sent back home, where he won’t be able to use his platform to push his ideas.

Then again, a man who is willing to stand by his convictions is always admirable, even if one doesn’t necessarily agree with him. That’s probably how it’s going to be for Amash.

Guess we’ll find out soon enough if this move will cost him big or not.