North Korea has threatened the United States yet again with an inter-continental ballistic missile, and Kim Jong Un has us standing on the precipice of World War III. Newsweek has chosen to bypass that tidbit of information to report instead on the major news that affects us all: the stiletto heels worn by Melania Trump and all the Trump females. 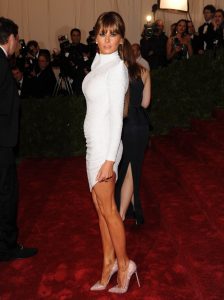 That’s right! Comparing Melania, Ivanka, and Trump’s daughters-in-law to “political mountain goats,” the article refers to them as the “female consorts of the Leader of the Free World.” Newsweek writes that they “do not set foot in public without first molding their arches into the supranatural curve that Mattel toy designers once devised for Barbie’s plastic feet.”

“In terms of the human example, we tend to find the defining characteristics of the opposite sex attractive. High heels function in a similar way. Males respond to the characteristic way a woman walks, i.e., the movement of the female pelvis: High heels just exaggerate the femaleness of the walk. So to deconstruct why Trump women wear high heels: They are just buying into traditional binary views of male and female.”

There you have it folks! The traditional binary views of male and female. Let me interpret that for you: Women want to be attractive to men! Shocking!!! This is real news at its finest. What a revelation!

The article goes on to report that when women wear high heels at work, they send sexual signals that should be avoided if they want to be taken seriously.

Can you imagine the backlash if these references were being made about Chelsea Clinton or Michelle Obama? How is it that the left praises Bruce Jenner for wearing high heel’s but persecutes the Trump women? It would seem that they just can’t keep their outrage narrative straight. Are liberals like Newsweek now acknowledging the differences in gender? How dare they!

Newsweek is not only upset with the sexuality on display when wearing heels, but also is appalled that Melania is never seen in public without them. They report that surprisingly she doesn’t seem to be concerned with tripping and falling. I suppose they’ve grown accustomed to Hillary walking with assistance and assume that is the norm.

Apparently “shoe shaming” is acceptable behavior now. I’ll be patiently awaiting the shock that is sure to come from the feminist camp. I have a feeling Jesus may return before that happens. Read the full Newsweek article here. 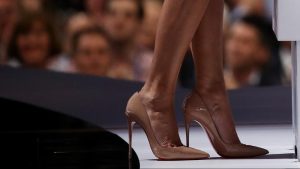