Did you see what happened when the Marines performed a year long experiment called the Ground Combat Element Integrated Task Force in which they simulated combat scenarios with a platoon of 400 Marines, 25% of which were females? They formed teams that were all male to compete against teams that were mixed. Do you think the results would surprise you?

Let’s use a hypothetical scenario in which we look at the  outcome of something far less intense than combat.  Consider professional football.  What if you had a team that consisted of all male professional players and had them square off against a team that, likewise, consisted of professionals, but a quarter of the team was female. These females could be the best of the best in terms of athleticism, agility, speed, and endurance.  I don’t even care if they were so hopped up on steroids and whey protein that they only saw red from the rage. Let them suit up and play.  Which team is going to win? You know! One. Hundred. Percent. Of the TIME!

Does that mean that the women on the team didn’t do their best to succeed?  Of course not.  It simply reveals the fact that men and women are different. Men excel at certain things while women surpass us men in many more.

So it obviously it isn’t that big of a shock to find that in the Marine experiment the all men teams outperformed the teams mixed with women in almost 70% of the tasks. The all male teams were consistently faster overall in every tactical movement. The report goes on to say 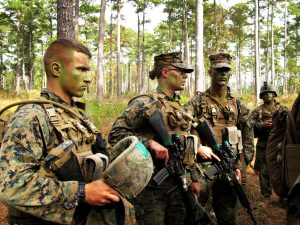 “All-male squads, teams and crews and gender-integrated squads, teams, and crews had a noticeable difference in their performance of the basic combat tasks of negotiating obstacles and evacuating casualties. For example, when negotiating the wall obstacle, male Marines threw their packs to the top of the wall, whereas female Marines required regular assistance in getting their packs to the top. During casualty evacuation assessments, there were notable differences in execution times between all-male and gender-integrated groups, except in the case where teams conducted a casualty evacuation as a one-Marine fireman’s carry of another (in which case it was most often a male Marine who “evacuated” the casualty)”

I’ll let you draw your own conclusions and I am in NO WAY saying that there isn’t a place for women in combat situations.  However, the marked difference in the performance of men and women serve as a stark reminder that we really are different, and all the rhetoric to the contrary is just that: All talk.

You can see more about the Marine study here.

And you can celebrate our differences by watching this!