SHOCKER! How Hillary Clinton Secretly Took Over The DNC 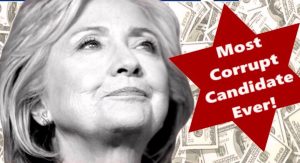 Donna Brazile reveals in a Politico article that as interim chair of the DNC she “had promised Bernie when (she) took the helm of the Democratic National Committee after the convention that (she) would get to the bottom of whether Hillary Clinton’s team had rigged the nomination process, as a cache of emails stolen by Russian hackers and posted online had suggested.”

Guess what she discovered!

“I’d had my suspicions from the moment I walked in the door of the DNC a month or so earlier, based on the leaked emails. But who knew if some of them might have been forged? I needed to have solid proof, and so did Bernie,” she says.

What Brazile discovered about the state of affairs at the DNC will shock you. The crazies were running the asylum.

I followed the money. My predecessor, Florida Rep. Debbie Wasserman Schultz, had not been the most active chair in fundraising at a time when President Barack Obama’s neglect had left the party in significant debt.

At that time the Democratic Party was shockingly broke and $2 million in debt.

Hillary’s campaign had taken a look at the DNC’s books. Obama left the party $24 million in debt—$15 million in bank debt and more than $8 million owed to vendors after the 2012 campaign and had been paying that off very slowly. Obama’s campaign was not scheduled to pay it off until 2016. Hillary for America (the campaign) and the Hillary Victory Fund (its joint fundraising vehicle with the DNC) had taken care of 80 percent of the remaining debt in 2016, about $10 million, and had placed the party on an allowance.

DNC had needed a $2 million loan, which the Clinton campaign had arranged without receiving unanimous agreement from the DNC board members. The party was fully under the control of Hillary’s campaign. That means that Hillary was even controlling the victory fund before even receiving the democratic nomination. The DNC had to give control to her or it would’ve collapsed from the debt. Campaign manager Robby Mook made an agreement with prior DNC head Debbie Wasserman Schultz, saying they would send the party nearly $20 million from September until the convention, and then even more to prepare for the election itself.

The party needed nearly $4 million per month just to stay afloat. Not small pocket change at all!

Right around the time of the convention, the leaked emails revealed Hillary’s campaign was grabbing money from the state parties for its own purposes, leaving the states with very little to support down-ballot races. A Politico story published on May 2, 2016, described the big fund-raising vehicle she had launched through the states the summer before, quoting a vow she had made to rebuild “the party from the ground up … when our state parties are strong, we win. That’s what will happen.”

Yet the states kept less than half of 1 percent of the $82 million they had amassed from the extravagant fund-raisers Hillary’s campaign was holding….

Hillary was in total control. At that point the only thing Bernie Sanders could do is push his supporters toward Hillary and hope she won. The money grabbing was blatant and the corruption wicked. Imagine what Hillary would have done if she had been elected to the White House!

Be sure to read the full story here!