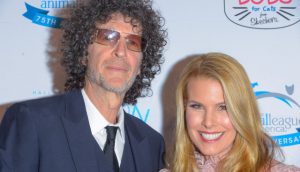 Shock jock radio host Howard Stern, who seems very desperate to remain relevant in modern popular culture, is now pushing for mandatory COVID-19 vaccinations while going off on “nut jobs” who refuse to take the COVID vaccine, including a few fellow radio personalities who have passed away from COVID complications.

The remarks were made during the Tuesday edition of “The Howard Stern Show” on SiriusXM, which marks his first broadcast in more than two months.

“I’m going to get a little preachy, which I know people don’t like, but I’ve been holding it in all summer,” Stern, 67, stated near the start of his radio program.

Mr. Stern then proceeded to criticize “imbeciles” who have willingly refrained from getting vaccinated against COVID-19, the disease caused by the novel coronavirus, including those who later died from it.

“But it’s really funny when these radio — the radio guys are the best. There was like four of them died. Four of them who were like ranting on the air that they would not get vaccinated. They were on fire, these guys, it was like day after day they were all dying. And then their dying words are: ‘I wish I had been more into the vaccine; I wish I had taken it’,” Stern went on to say.

“You know, I have trouble drumming up compassion,” Stern’s co-host Robin Quivers, who formerly served as a nurse and U.S. Air Force veteran said. “And I think that’s a terrible thing. To not be able to drum up compassion for people that stupid that they wind up dying.”

Mr. Stern agreed he found it difficult to drum up compassion for vaccine critics who become sick with COVID-19, including namely several conservative radio hosts who died from the disease in recent weeks.

“When are we going to stop putting up with the idiots in this country and just say you now — it’s mandatory to get vaccinated,” he stated.

“It’s time to get these people vaccinated whether they want it or not. Tell them they can’t do anything,” Stern said later in the show.

Chris Wilding, a writer for the show, subsequently brought up Dick Farrel, a conservative radio host from West Palm Beach, Florida, among the several vocal vaccine skeptics to recently die from COVID-19.

“He said ‘power trip libb loons’ trying to make everyone believe the pandemic was still a threat just so they could seize more power. Well he’s dead, so,”Wilding went on to say about Farrel, who died on Aug. 4.

This is the tolerant left, ladies and gentlemen.

People like Stern still seem incapable of understanding that the vast majority of conservatives are not anti-vax. We’re skeptical of the effectiveness of this vaccine and whether or not it is actually safe to take in the long-term. Those are reasonable fears.

Stern, and the ilk who listen to his show, are the ones who will be ushering in the socialistic remix of the United States.