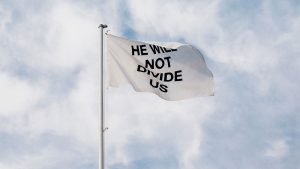 If you missed Shia LeBeouf’s attempt at art that began back in 2016, only to be turned into an epic game of capture-the-flag by 4Chan and Reddit users with apparently nothing better to do, then you are certainly in for a treat.

LeBeouf began his art installation (the term “art” is used casually here) as a live stream in Manhattan when Trump was elected in 2016.

The live stream camera was fixed on a flag that read “he will not divide us”, referring to Trump, and passers-by were expected to repeat the mantra into the camera.

It didn’t take long for the entire thing to be hijacked by Trump supporters and was even used as the location for an episode of ‘Louder With Crowder’.

Several altercations ensued, some even involving LeBeouf, so the host site, The Museum of the Moving Image, booted the installation.

It was then moved to the El Rey Theater in Albuquerque, where once again it was hijacked.

LeBeouf, frustrated, moved the flag to a secret location, and this is where things got particularly hilarious.

Instead of inspiring unity (by resisting the President that half the country voted for), LeBeouf unwittingly sparked a global game of capture-the-flag.

4Chan and Reddit users, determined to troll LeBeouf to the ends of the earth, famously analyzed weather patterns, flight paths, maps, and even the stars from the live stream to locate the flag.

When they narrowed down the location, they sent someone there to drive around honking so they could gauge how close they were to the flag.

When they found it…they replaced it with a MAGA flag.

Despite this Herculean trollery, LeBeouf only became more determined to outwit the Trumpsters.

He moved the installation overseas, complaining that “events have shown that America is simply not safe enough for this artwork to exist.”

He brought it firs to the Foundation for Art and Creative Technology in Liverpool, UK, where it lasted a whopping 24 hours, then to “le lieu unique” in France, and finally to the Muzeum Sztuki in Łódź, Poland.

When LeBeouf finally resorted to a remote cabin in Lapland, Finland…they found him there too.

It appeared that LeBeouf had finally admitted defeat…until now.

With the midterms fast approaching, he’s apparently thought what America really needs right now is a reminder that Trump-supporting trolls always find a way to win.

It’s only a matter of time, Shia…