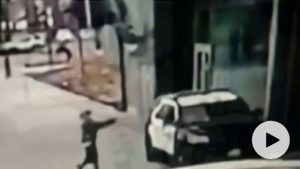 Police officials in Los Angeles have announced they are offering up a $100,000 reward for any information about the gunman who ambushed two sheriff deputies on Saturday evening and shot them in the head in the Compton area while their car was stopped.

A video of the incident was captured and the Los Angeles County Sheriff’s Department is hoping that the reward will inspire some loose lips to help sink this man’s ship.

Here’s what we know from Fox News:

Update: The gunman walked up on the deputies and opened fire without warning or provocation. pic.twitter.com/cBQjyKkoxJ

The sheriff’s deputies’ injuries were listed as critical immediately after the shooting, and both underwent surgery, police said. Their conditions have since been downgraded to stable, according to multiple reports.

Sheriff Alex Villanueva said during a subsequent press conference that the victims “survived the shooting and [are] recovering, a double miracle,” the Los Angeles Times reported, noting that both deputies were shot in the head.

“There is no rhyme or reason to it; it is an act of a coward,” Villanueva reportedly said. “Obviously tensions were running high in the neighborhood with the deputy-involved shooting. But there is no nexus to it at this time. We are chasing all leads.”

To make matters worse, protesters showed up outside the hospital where these two wounded heroes were being treated for their injuries, spewing venomous hatred by “hoping they died.”

This is further proof that the Black Lives Matter group is compromised of soulless terrorists who are attempting to use fear tactics in order to have their list of demands met. What’s worse is the fact they don’t care that if their list of demands is met, which includes defunding police, their own neighborhoods will suffer the most from lack of police presence.

But then again, that’s the point, right? Get rid of cops so chaos reigns supreme. Force folks to vote Democrat, trading liberty for security.