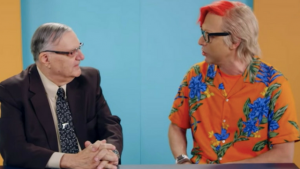 Sacha Baron Cohen has been interviewing unsuspecting people in disguise for years, but he has now been served with a pretty fair challenge from controversial former Maricopa County Sheriff Joe Arpaio: come back and interview me for real.

Everything Cohen does he mostly does for laughs, while it’s definitely questionably ethical to conduct deliberately ridiculous interviews with prominent figures in disguise.

While you love or hate his methods, you have to admit that the majority of interviewees are probably pretty ticked when they realize what they were roped into, especially when you consider a lot of his “interview” material is pretty outrageous.

So when Arpaio, who is currently running for Congress in Arizona, realized he’d been duped into an interview with Cohen, who had disguised himself as a ludicrous Finnish television personality, he probably wasn’t thrilled.

Western Journal explains how Cohen borderline slandered the former Sheriff in their interview:

“The only thing I got was that he would offer me a job,” Arpaio told the Washington Examiner.

“I didn’t hear that little thing before that.”

Cohen claimed to be a Finnish celebrity who called himself OMGWhizzBoyOMG for the segment and “began discussing various ‘jobs,’ President (Donald) Trump and golden showers,” reported the Washington Examiner.

“So (Cohen is) talking and I couldn’t understand him,” Arpaio told the Washington Examiner.

So, Arpaio had a challenge to Cohen, which you can imagine many of Cohen’s previous interview targets might feel is a great idea:

“Get the guts, get out of your undercover role, come and interview me in English, of course, so I can understand him so we can go man-to-man,” Arpaio told the Washington Examiner.

Seems reasonable. Who’s to say this wouldn’t be just as, if not possibly even funnier?