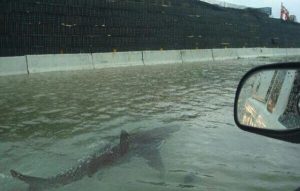 The internet is so fun.

With all the hype surrounding the incoming Hurricane Florence (which, don’t get me wrong, seems to be quite warranted), leave it to bored people on the internet to have a little fun.

The made-for-TV movie Sharknado will, like Snakes on a Plane, be remembered and referenced for years to come simply based on its silly title and even sillier plot.

But it was only a matter of time before an internet rumor arose that an actual sharknado may take place, and, hilariously, many have actually fallen for it in this case.

“This appeared somewhere. ‘Florence Now Contains Sharks.’ I’m telling you,” Limbaugh said on his show Tuesday, claiming the National Oceanic and Atmospheric Administration (NOAA) reported the information. “Sharks are being lifted out of the Atlantic Ocean and dumped into the storm because it’s so strong. It’s sucking ’em in there — and then they’re gonna be in the waters. Of course, the only water that might contain sharks would be storm surge — it isn’t gonna be raining sharks — and that’s the predominant water source in a hurricane is rainfall.”

Later in the show, Limbaugh said, “I have a claim that a parody site is claiming that the sharks in the hurricane story is not true. I don’t believe it.”

Amazing that he stuck to his guns, but it is indeed true that the sharknado is just a gag.

That didn’t stop it from being passed around Twitter:

If it’s a graphic on the internet, it must be true, right?

Sadly, no, as the Daily Wire explains, the “news alert” came from the parody site breakyourownnews.com, where you can make news alerts that say anything.

Apparently, shark sitings during hurricanes are a common occurrence, as we saw last year during Hurricane Harvey:

Believe it or not, this is a shark on the freeway in Houston, Texas. #HurricaneHarvy pic.twitter.com/ANkEiEQ3Y6

The same image has been recirculated several times over, typically localized to some big city in the United States that has just experienced a hurricane or other weather event producing heavy rains and floods. Its most recent iterations assigned it to Houston after heavy rains pounded portions of Texas over Memorial Day weekend in 2015, Daytona Beach after Hurricane Matthew approached Florida in October 2016, and Houston again in August 2017 after Hurricane/Tropical Storm Harvey caused massive flooding throughout the city.”

So while you can never be too careful, if you hear any reports of sharks in the midst of Hurricane Florence, there’s a good chance they’re not true.

Stay safe out there, folks!