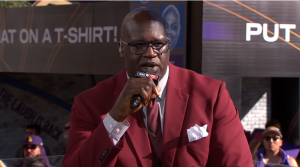 Sorry, y’all, but I can’t much bring myself to care a whole lot about sports or which athlete did what on which day. Maybe it’s because I live in Buffalo Bills country and have become jaded, who knows.

But, when an athlete, retired or not, drops some serious truth bombs, that person has my attention. Today, that person is Shaquille O’Neal.

The former NBA star isn’t just a gentle giant who just donated a house to the family of a 12-year-old who was left paralyzed after a shooting in Atlanta, he also isn’t afraid to say a thing or two about the First Amendment.

During TNT’s pre-game show on the opening night of the NBA season yesterday, O’Neal expressed his support of Houston Rockets general manager Daryl Morey, who ignited the NBA’s current controversy between its home territory, America, and one of its biggest buyers, communist China, after expressing support for Hong Kong protesters in a tweet. O’Neal also took a shot at the NBA’s shameful Chinese bootlicking and its moves to censor as many claims of China’s human rights abuses as it possibly can.

“As American people, we do a lot of business in China,” O’Neal said, seated among his fellow Inside The NBA hosts Ernie Johnson, Kenny Smith, and Charles Barkley. “And they know and understand our values and we understand their values. And one of our best values in America is free speech. We’re allowed to say what we want to say and we’re allowed to speak up on injustices, and that’s just how it goes.”

“Daryl Morey was right,” O’Neal said. “Whenever you see something going on wrong anywhere in the world, you should have the right to say that’s not right, and that’s what he did.”

“Here, we have the right to speak,” O’Neal continued. “And especially with social media, we’re going to say whatever we want to say, when we want to say it.”

Co-host Kenny Smith chimed in, saying that Morey had the right to speak regardless of whether or not anyone disagreed with it, and that attempts to silence him are akin to telling LeBron James to “shut up and dribble,” drawing parallels to LeBron’s outspokenness about equally controversial social justice issues.

At this point, Daryl Morey remains employed with the NBA, but Chinese companies continue to press into the association and demand that he be punished for daring to utter a word against the Communist Party.

I never thought I’d say this, but let’s all have the same boldness as Shaquille O’Neal when it comes to defending our right to freedom of speech!