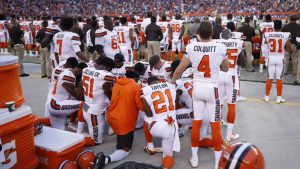 Fox 8 Cleveland says an Ohio Supreme Court justice is criticizing some Cleveland Browns players who prayed in silent protest during the national anthem before a game.

Justice Bill O’Neill writes on Facebook he won’t attend any games at which “draft dodging millionaire athletes disrespect the veterans who earned them the right to be on that field.” He said Tuesday “shame on you all.” 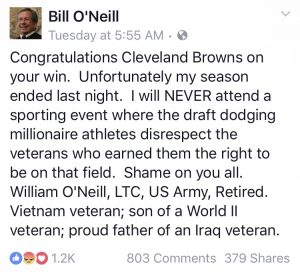 O’Neill notes he’s a Vietnam veteran whose family has a history of military service. He’s also the lone Democrat holding a statewide office in Ohio.

More than a dozen Browns players kneeled and formed a circle on the sideline during the anthem Monday. Tight end Seth DeValve says he wanted “to pray for our country.”

Browns linebacker Christian Kirksey talked to FOX 8 News on Tuesday, and said, “Respect to all the veterans, respect to the military — we are not protesting against them. We have our reasons for doing what we did, and last night felt like the right time to do it, and that’s why we did it.”

The protest was the largest in a social-consciousness movement started last season by San Francisco 49ers quarterback Colin Kaepernick currently a free agent.