The Sexual Revolutionaries are on a Radical Crusade! 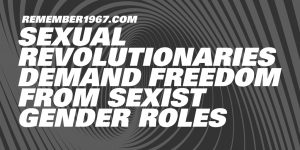 One of the most famous sayings of the Russian Bolshevik Revolution, (which was probably wrongly attributed  to Leon Trotsky) was this: “You may not be interested in war, but war is interested in you.”

You may not be interested in what the LGBT+ says or does, but they are interested in you. You cannot be neutral toward them. If you dare disagree with them or challenge their lifestyle and worldview, you will be labeled  with a whole montage of names — homophobes, bigots, racists, etc, as well as facing potential libel lawsuits, at best, and jail time, at worst, for hate-speech leading to potential hate-crimes. They do not subscribe to the “live and let live” view espoused by earlier homosexual activists. It is their worldview and lifestyle — always and only.

In the late 1980s, two homosexual activists, Marshall Kirk and Hunter Madsen, published an article and a book detailing a “planned, psychological attack” on the straight opponents of the homosexual movement, These publications rapidly became the main sources of strategic planning employed by homosexual activists to win over the hearts and minds of the heterosexual majority to their cause.

In the November 1987 edition of Guide, a magazine for homosexuals, the two men authored an article titled “ The Overhauling of Straight America .” There Kirk, a researcher in neuropsychiatry, and Madsen, a public relations consultant, laid out a blueprint to fundamentally change Americans’ attitudes toward homosexuals and homosexuality, especially targeting their strongest opponents…born-again Christians. In 1989 they expanded that blueprint into a 398-page book titled After the Ball: How America Will Conquer Its Fear and Hatred of Gays in the 90s.

Their goal was to make homosexuality acceptable and to forge negative opinions of any who disagree.

One person described “The Overhauling of Straight America” as the “bible” of the homosexual agenda.

Following this “bible’s” instructions the crusade has swept America and established a new religion, “the religion of sex”. It has taken over great portions of government, media, and academia making them their temples.

The following are but three examples taken from at least fifty other colleges that offer “crusaders propaganda”  for the sexual revolution:

Indiana University is offering Topics In Gender Studies (We’re All A Little Crazy: Gender, Madness, & Popular Culture). (The description is too profane to print.)

The University of Maryland offers Homophobia in the U.S. Society in the New Millennium. The stated goal is not to educate, but to activate students to take up a political crusade. Its purpose is to “focus on students’ powers and responsibilities within struggles to end discrimination based on sexuality.”

The Ivy League’s Brown University is apparently proud to offer Prostitutes, Mothers, + Midwives: Women in Pre-modern Europe and North America. Or a Brown student could take Feminist Theory for a Heated Planet which, according to the description, has something to do with “the eruption of Gaia.”

Swift published a Gay Manifesto in February 1987 that was later titled, “Gay Revolutionary.” It was reprinted in the Congressional Record without the opening line describing it as an “eruption of inner rage on how the oppressed desperately dream of being the oppressor.”

Leading LBGT+ activists come to Swift’s defense and argue that this was his “desperate dream” and only satire. The fact that it was printed in one of the largest homosexual publishing circulations in 1987, hardly supports this defense, especially when one considers how much of what he states has come to pass since it was published.

“This essay is an outré, madness, a tragic, cruel fantasy, an eruption of inner rage, on how the oppressed desperately dream of being the oppressor.

We shall sodomize your sons, emblems of your feeble masculinity, of your shallow dreams and vulgar lies. We shall seduce them in your schools, in your dormitories, in your gymnasiums, in your locker rooms, in your sports arenas, in your seminaries, in your youth groups, in your movie theater bathrooms, in your army bunkhouses, in your truck stops, in your all male clubs, in your houses of Congress, wherever men are with men together. Your sons shall become our minions and do our bidding.

There will be no compromises. We are not middle-class weaklings. Highly intelligent, we are the natural aristocrats of the human race, and steely-minded aristocrats never settle for less. Those who oppose us will be exiled.

The family unit-spawning ground of lies, betrayals, mediocrity, hypocrisy and violence–will be abolished. The family unit, which only dampens imagination and curbs free will, must be eliminated. Perfect boys will be conceived and grown in the genetic laboratory. They will be bonded together in communal setting, under the control and instruction of homosexual savants.

All churches who condemn us will be closed. Our only gods are handsome young men. We adhere to a cult of beauty, moral and esthetic. All that is ugly and vulgar and banal will be annihilated.

We shall rewrite history, history filled and debased with your heterosexual lies and distortions. We shall portray the homosexuality of the great leaders and thinkers who have shaped the world. We will demonstrate that homosexuality and intelligence and imagination are inextricably linked, and that homosexuality is a requirement for true nobility, true beauty in a man.

We shall be victorious because we are fueled with the ferocious bitterness of the oppressed who have been forced to play seemingly bit parts in your dumb, heterosexual shows throughout the ages. We too are capable of firing guns and manning the barricades of the ultimate revolution.

Tremble, hetero swine, when we appear before you without our masks.”

“They are surprised when you do not join them in the same flood of debauchery, and they malign you” (1 Peter 4:4, ESV).