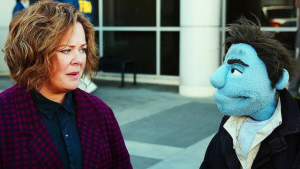 There’s a long-standing tradition in Hollywood of taking innocent children’s themes and making them dirty for the sake of a few yucks (not to mention trying to make a few bucks).

The upcoming film, “The Happytime Murders”, isn’t the first grownup movie to use puppets, but its references to Sesame Street, the benchmark for cute, happy puppets, has landed its production company in hot water.

The Wrap reports that Sesame Workshop, the company that produces the celebrated children’s show, has filed suit against STX Productions not only for the use of the tagline, “No Sesame. All Street.”, but for use of the tagline in a film that is clearly full of sexually explicit references, which has “confused and appalled” who think the film is associated with Sesame Street.

“Sesame seeks to enjoin Defendants’ deliberate effort to appropriate its SESAME STREET mark, and its trusted brand and goodwill, to promote their R-rated movie, The Happytime Murders, by way of a violent and sexually-explicit trailer,” it continues.

“SESAME STREET is a registered trademark of Sesame, an organization with a long and storied history of ‘helping kids grow smarter, stronger and kinder.’ Defendants’ widely-distributed marketing campaign features a just-released trailer with explicit, profane, drug-using, misogynistic, violent, copulating, and even ejaculating puppets, along with the tagline ‘NO SESAME. ALL STREET.’

“Defendants do not own, control or have any right to use the SESAME STREET mark. Instead, they are distributing a trailer that deliberately confuses consumers into mistakenly believing that Sesame is associated with, has allowed, or has even endorsed or produced the movie and tarnishes Sesame’s brand.”

Here’s the preview in question, although be warned, it is as vulgar as Sesame Workshop says it is:

STX Productions is unphased by the suit, saying While we’re disappointed that Sesame Street does not share in the fun, we are confident in our legal position. We look forward to introducing adult moviegoers to our adorably unapologetic characters this summer.”

Apparently, Sesame Street is just too square, as far as they’re concerned.