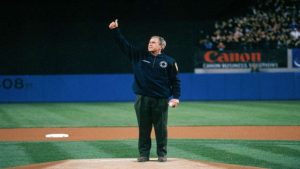 Shortly after the terrorist attacks on September 11, 2001, then-President George W. Bush threw what could be considered the most memorable ceremonial first pitch of any MLB game in history.

On an emotional night in October, President Bush threw out the first pitch in Game 3 of the World Series at Yankee Stadium in New York City. The president threw a perfect strike to Yankee catcher Todd Greene. (As a point of trivia, I played baseball with and against Todd Greene throughout high school in our hometown of Augusta, GA.)

President Bush said he was first advised that Game 1 might be more fitting, as it would be played in Arizona, at the Diamondbacks’ home stadium.  They felt it would be a safer option. “I rejected that out of hand,” said Bush.

New York City, at Yankee Stadium, was the only place he knew it had to be done.

“I knew the symbolism and what it would mean for Americans when we felt so vulnerable and we were still afraid,” said Former First Lady Laura Bush.

For those of us that saw the pitch as we watched live on television or in the stadium itself will readily admit that he made the right decision!

Watch the video below and remember.