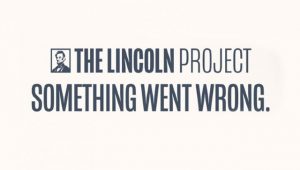 Paul Hastings, the law firm that’s been hired to give a “comprehensive review” of the anti-Trump Lincoln Projects “operations and culture” might not be able to deliver credible results due to the fact that several senior partners who work for the firm have donated a significant amount of cash to the group.

The firm’s managing partner, Greg Nitzkowski, who has worked for their for 20 years, gave the Lincoln Project $3,000 in 2020 according to federal election records. Elena Baca, the head of the firm’s employment law department gave them $2,000.

According to her bio on the Paul Hastings website, Baca is “considered a ‘go-to’ employment lawyer for many large employers with high-profile disputes involving high-level executives and contentious high-stakes litigation.” She has won praise for her “aggressive approach” to defending clients against “claims of sex discrimination and retaliation.”

The Lincoln Project could soon require the services of an attorney with Baca’s skill set. The group’s only female cofounder, Jennifer Horn, has instructed the group (via her lawyer) to retain documents in anticipation of a lawsuit. Horn, who resigned from the group on Feb. 5, has made allegations of abusive and demeaning treatment by Lincoln Project executives.

Three other Paul Hastings partners have donated money to the Lincoln Project: Sam Alavi, whose clients include the Qatar Investment Authority; Joseph Profaizer, who has defended Chinese firms against allegations of intellectual property theft from U.S. competitors; and Steven Marenberg, who previously represented Donald Trump and NBC Universal in a copyright case involving The Apprentice.

The Lincoln Project made the announcement on Monday that they had hired the Paul Hastings firm for the specific purpose of carrying out an internal investigation into the scandal involving John Weaver who is being accused of sexual harassment.

“We are committed to creating a positive, diverse, and inclusive workplace environment at The Lincoln Project, and inappropriate behavior by anyone associated with the organization will not be tolerated under any circumstances,” the Lincoln Project said in a statement.

Many folks see this move as an attempt to try and calm the nerves of donors and major media outlets who originally fawned all over the anti-Trump group and helped it rise to become one of the top super PACs of the 2020 presidential election cycle.

Many of the folks who work for the Lincoln Project have denied having any knowledge of Weaver’s activities — which includes sexual flirtation with a 14-year-old boy — but that might not be completely true.

There are currently several employees who work for the group that are trying to get out from under Nondisclosure Agreements so they can talk openly about what happened at the organization.