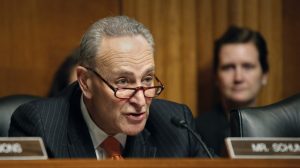 According to new reports, the Senate is planning a vote as early as Wednesday on legislation that will extend funding for the government beyond the September 30th deadline.

Majority Leader Chuck Schumer is planning to bring up the bill just in time for the House to pass it for President Joe Biden’s signature.

The official end to the fiscal year is Sept. 30, which requires Congress to pass a bill with temporary funding in order to prevent the government from being shutdown.

The measure would extend government funding until Dec. 3 and would provide emergency aid to states damaged by wildfires and hurricanes, as well as money to help resettle Afghan refugees.

Senate Republicans blocked the government funding extension when it came up for a vote on Monday. That bill included a provision to raise the nation’s debt limit, which GOP lawmakers oppose.

Schumer on Tuesday excoriated the GOP for refusing to help Democrats raise the debt limit.

“Never has there been a default caused by pure stupidity — in this case, Republican stupidity,” the New York Democrat went on to say.

Republicans say Democrats should raise the debt limit unilaterally, arguing that new borrowing will be required to pay for the Democrats’ plan to spend up to $3.5 trillion on a social welfare package.

The Senate filibuster rule means that in order to raise the debt limit in a piece of regular legislation, 10 members of the Republican Party will have to vote in favor of the bill so they can reach the 60 vote threshold.

“Democrats could attach it to the $3.5 trillion spending bill, which they hope to pass using a budgetary tactic that avoids the filibuster. But Schumer and other Senate Democrats said it would take too long to add it to the spending bill,” the report explained.

Sen. Schumer then went on to say that adding it to the spending package, which is what the GOP is demanding, “is very risky and would lead to a default.”