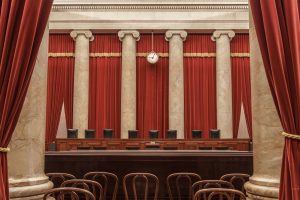 Ah, democracy. Such a fickle thing.

When checked by common-sense fixtures like the Constitution in our own republic, democracy can be a powerful vessel in preventing the government from becoming unrecognizable to the citizens it is supposed to represent.

But, when allowed to flow freely and run amok, democracy allows mob rule to take over in every initiative—great or small—where the rights of 49 percent of the people are disregarded in favor of the other 51 percent.

Somewhere deep down in the part of their brain where their conscience and common sense lie dormant, I think even the most staunch Democrats know this. But the degree to which they seem willing to stifle that knowledge is ever-increasing.

In the age of the internet and, more recently, social media, Americans are gifted with unprecedented access to their elected officials—or, at least, their every published thought.

Once in a while, though, these folks get a taste of the closest thing to a pure democracy when they put a question to the People Of Twitter™ and it absolutely blows up in their face.

When the Democratic Senatorial Campaign Committee posted a simple poll on Twitter asking followers which flavor of unelected-for-life legislator-from-the-bench they prefer, they probably expected a nice, unchallenging, affirming outcome from the echo chamber.

They didn’t get it. It was glorious. 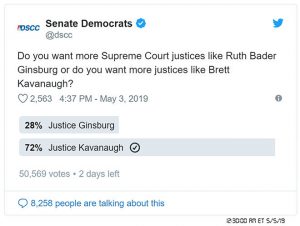 Say what you will about Justice Kavanaugh’s track record thus far, if only given these two choices and no option to abstain from voting, who would you honestly pick?

That’s what I thought.

And, over 50,000 votes later, the People of Twitter™ agreed, with Kavanaugh dwarfing Ginsburg by nearly 50 points.

Sadly, Twitter polls mean nothing and, to folks like the Senate Democrats, neither does consistency and integrity. When the vox populi seemed to be clamoring for that mean, nasty conservative, they showed their true colors and pulled the plug on the poll and deleted the tweet.

Of course, the DSCC said nothing of their reason for deleting the tweet. No claims of collusion or pot-shots at the electoral college. Just silence, perhaps hoping no one had noticed—or taken screenshots of—the concrete proof of their separation from the will of the true majority.

Sorry, Dems. We noticed, we laughed, and we will not be silenced.