Sen. Warnock Deletes Tweet After Getting Called Out For ‘Heresy’ 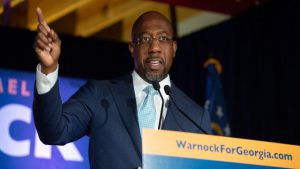 Extreme leftist Sen. Raphael Warnock, who is supposedly an ordained minister, decided to trash a tweet he posted on Twitter Easter Sunday after folks accused him of being a heretic to the Christian faith.

Warnock apparently stated that Easter transcended the resurrection of Jesus Christ, the basis of the very holiday, and stated that both believers and non-believers can save themselves by doing good.

“The meaning of Easter is more transcendent than the resurrection of Jesus Christ,” tweeted Warnock, who took the national spotlight by serving as senior pastor of the Rev. Martin Luther King Jr.’s former church in Atlanta. “Whether you are a Christian or not, through a commitment to helping others we are able to save ourselves.”

Warnock deleted the tweet several hours later after being lambasted on Twitter as a “phony pastor” and “false teacher,” and for promoting “false doctrine,” “blasphemy,” and “unbiblical theology,” according to The Washington Times.

Many Twitter users pointed out Warnock’s remarks were “heresy,” according to Townhall.

“This is a false gospel and heresy. We cannot save ourselves,” attorney Jenna Ellis tweeted. “The absolute truth and only meaning of Easter that matters is the literal, physical resurrection of Jesus Christ, and we must accept Him as Lord and Savior. Read Romans, ‘Reverend’ Warnock. You are a false teacher.”

The College Republicans over at Georgia State University rebuked Warnock by posting Ephesians 2:8-10.

“For by grace you have been saved through faith. And this is not your own doing; it is the gift of God, not a result of works, so that no one may boast. For we are his workmanship, created in Christ Jesus for good works, which God prepared beforehand, that we should walk in them,” the tweet read.

Other folks took aim at the heretical claims made by Warnock too.

“With all due respect, this is literally the opposite of what the Gospel says. Ephesians 2 states that clearly. Faith alone, Christ alone,” former ESPN producer Jason Romano posted.

One Lutheran pastor stated that Warnock’s comments were “disheartening.”

“Rev. Warnock, with respect, the whole point of Easter is that Christ died to take away the sins of the world and rose to show they were sealed in the grave. Christ saves, nothing else. It’s disheartening to see you, a fellow clergyman, downplaying the central tenet of our faith,” the pastor wrote in his response.

“There is nothing more transcendent than the resurrection of the God-man, Jesus. Literally: his resurrection transcends our finite conceptions of science & rationality. That the Word became flesh, dwelt among us, then was slain for our sins only to conquer death 3 days later?” Author and podcast host Allie Stuckey stated.

Stuckey is right on the money. The resurrection, coupled with Jesus’ death and birth, are the three most significant events to happen in all of human history. Our entire reality hinge on these three events. Let that sink in a moment.

If a man, who is God, actually died on a cross to save people from their sins and rose from the dead to give all his followers eternal life, there is nothing more significant than that. Nothing.

And there’s a whole lot of evidence out there to support these things as absolutely true. Warnock, however, is a wolf in sheep’s clothing. A false teacher in every sense of the word. May God lead him back to the truth.