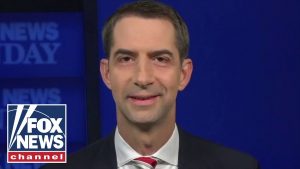 Sen. Tom Cotton took the Biden administration apart in simple, yet brutal fashion after a new report from NBC News was released that indicated over 100 illegal immigrants had been released in the state of Texas who were all COVID-19 positive.

But that’s not all. These individuals stated they planned to visit other states too.

This led Cotton to tweet out that “President Biden’s border crisis is a superspreader event.”

The NBC News report retweeted by Cotton cited one immigrant who tested positive and stated she was headed for Houston. The report added:

Other migrant families who also said they had tested positive were waiting to go to other destinations: North Carolina, Maryland and New Jersey. The city of Brownsville administers these rapid tests at the bus station, after migrant families are released by the Border Patrol. A spokesperson for Brownsville confirmed that, since they began doing these tests Jan. 25, 108 migrants have tested positive for Covid-19, which is 6.3 percent of those who took the test.

Cotton has not been reticent to criticize Biden even before he became president. In April 2020, writing in National Review, Cotton blasted Biden for his consistent support for Communist China. “Joe Biden Is China’s Choice for President,” declared the title.

Cotton kicked things off by noting, “The Democratic Party has always been weak on national security when it comes to China. But some credit is due when it comes to China’s atrocious human-rights record and its theft of American jobs. For a generation, prominent Democrats loudly criticized Beijing on these fronts … Chuck Schumer and Nancy Pelosi have been longstanding China trade hawks, for instance. Even a socialist like Bernie Sanders has been a reliable critic.”

Then Cotton set his sights on Biden saying, “Despite the occasional box-checking, wishy-washy comment slapping Beijing on the wrist for the worst of its abuses, the reality is that the former vice president’s support of the People’s Republic of China is deep and longstanding.”

If there’s one thing we can count on from Cotton, it’s his boldness to tell the truth and to take the hypocrites on the left to task for their hypocrisy.

For over a year now, Democratic leadership in both the federal government and at the state level have told us how critical it is to save even just one life, using that line to justify the use of mask mandates and lockdowns that have had a devastating impact on our economy.

But when they are responsible for one of these “superspreader” events due to their immigration policies, there’s suddenly no concern about COVID-19. All that matters is being politically correct and favoring illegal immigrants so they can flesh out the Democratic Party.