Sen. Tom Cotton Comes Out Swinging For The Fences Against Media 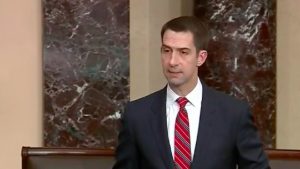 Republican Sen. Tom Cotton of Arkansas has accused the mainstream media of attempting to silence him for attempting to “expose” the Democratic Party’s radical agenda after the Washington Post was once again forced to issue a fact-check correction concerning prisoners receiving stimulus checks.

Cotton sat down for an interview with Fox & Friends co-host Steve Doocy about the correction on Monday.

“The reason they keep fact-checking me is not because I’m not telling the truth,” Cotton went on to say. “It’s because I am telling the truth. I’m exposing the crazy ideas of the Democratic Party and their praetorian guard, and the media doesn’t want to let me speak out to those truths.” on Monday.

Kessler acknowledged that Cotton’s prediction was, in fact, accurate in a correction issued Jan. 6 via Twitter.

“It turns out Tom Cotton predicted correctly – Dzhokhar Tsarnaev, the Boston bomber, did get a stimulus check,” he stated in a tweet. “So we’ve adjusted the Pinocchio rating on this 2021 fact check.”

The senator said he tried to bar felons from receiving stimulus money, but his measure was voted down along party lines.

“I proposed an amendment that would prohibit checks from going to criminals like the Boston Marathon bomber; the Democrats voted against my amendment,” Cotton remarked. “The Democrats said on the Senate floor that they wanted checks to go to prisoners, so murderers and rapists and pedophiles across America got your tax dollars last year.”

It was confirmed just last week that the Boston Marathon bomber received stimulus funding, which will now be applied toward the $101 million he owes the victims of his crime.

“If the media wants to keep starting these fights with me, I’m happy to finish these fights because the American people deserve the truth,” Cotton stated with conviction.

“Massachusetts district court judge George O’Toole last week ordered Tsarnaev to give back the $1,400 payment he received in prison in June 2021,” the report stated, adding, “Tsarnaev was sentenced to death in 2015 for the Boston Marathon terrorist attack after he was found guilty of 30 charges of having killed three and injuring 265 others, but the sentence was reversed in July 2020 by the First U.S. Circuit Court of Appeals.”