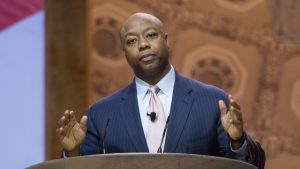 Sen. Tim Scott recently made a trip to the state of New Hampshire and it seems this is starting to spark up rumors and speculation that he is not only seeking reelection during the midterms next year, but also a potential White House run in 2024.

This wouldn’t be surprising at all. Scott has only grown in popularity with conservatives over the last few years and proven himself to be a reliable person with convictions about liberty and small government.

Scott, R-S.C., is in the early primary state for the New Hampshire Republican State Committee fundraising dinner being held in Manchester on Friday, and on Saturday will travel to Concord, where he is headlining a picnic and joint fundraiser for GOP Committees in Merrimack County and Concord, reports Fox News.

Scott’s team said that while in New Hampshire, he will focus on the $3.5 trillion budget reconciliation plan being pushed by the Biden administration and Democrats, and to address the negotiations over raising the nation’s debt limit. He’s also expected to highlight the importance of party unity.

The senator’s profile has been climbing, including gaining national attention with his GOP response to President Joe Biden’s prime-time address to a joint session of Congress. He has also lead the party’s negotiations with congressional Democrats on police reform.

“Clearly anyone who’s going to Iowa or New Hampshire right now wants to be president. By going now, they’re keeping the option to run open,” GOP strategist Alex Conant went on to say.

“If you want to run for president, you need to be laying the groundwork right now,” Conant continued. “That doesn’t guarantee that you will be running for president but since the field is potentially very open and very competitive, it’s important to get started early.”

“Tim Scott is a force,” longtime New Hampshire-based Republican consultant Jim Merrill stated when discussing Scott, who is currently the only Black Republican serving in the Senate. “His strong fundraising numbers reflect how he has inspired activists and business leaders alike, good for both his reelection next year and for a potential presidential campaign in 2024.”

Scott made a trip to Iowa during the spring, which is traditionally where caucuses begin their presidential campaign season. Jeff Kaufmann, the chairman of the Iowa Republican Party, said that Scott is a “man of integrity.”

Scott, however, has been consistently downplaying any sort of talk about running for president in 2024. He went on to tell the folks at Fox News earlier in the year that his “only objective is to be the United States senator for the great state of South Carolina.”