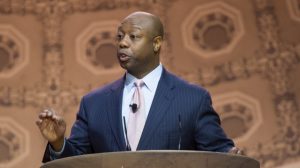 A new television ad paid for by the Republican National Committee stars up and coming conservative powerhouse Sen. Tim Scott from South Carolina lighting into President Joe Biden over his socialist policies that he says are ripping America apart.

Scott delivered the GOP rebuttal to the president’s joint-address to Congress that took place back in April. Audio from that rebuttal was used in the new ad.

“A president who promised to bring us together should not be pushing agendas that tear us apart,” Scott says as migrants arriving at the Southern border, missile strikes on Israel, and a line of cars waiting for gas following a ransomware attack on Colonial Pipeline are seen in the video.

“Our best future will not come from Washington schemes or socialist dreams. It will come from you, the American people. The best is yet to come,” Scott says.

The new 30-second ad, a seven-figure video, was provided exclusively to the Washington Examiner. It will run on cable networks during this non-election year.

“Joe Biden has offered nothing but divisive partisanship and failed policies,” RNC Chairwoman Ronna McDaniel said, taking a big shot at the president. “With Americans more divided than ever, thanks to his failed leadership, the Republican Party is proud to offer a better vision for America, which is why we are bringing our conservative message of unity and prosperity to the national airwaves. Our winning Republican agenda will triumph over Democrats’ politics of division and lead our nation towards a better, brighter future.”

Republicans aren’t wasting a moment in putting together some solid attacks against Biden’s agenda as they gear up to battle for control of Congress in 2022.

There are a lot of folks, House Minority Leader Kevin McCarthy included, who think it’s possible that Scott might try a 2024 presidential bid.

“I have never been more confident in the American family,” a statement released by Scott said. “Republicans have proven to the nation that conservative solutions and commonsense policies could lift millions out of poverty, create a more inclusive economy, and chart a direct path to the American Dream.”

“Our future is in the hands of everyday Americans working hard to support their families and give back to their communities. With Republicans at the helm, we’ll make sure they have every opportunity to succeed,” he continued.

Could be a nice addition to the candidate pool for the GOP if Trump decides not to run in 2024.