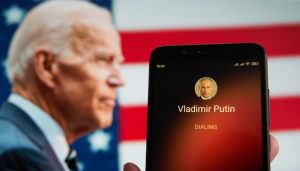 Senate Minority Whip John Thune says President Joe Biden has been on “the wrong side of every foreign policy decision” for years, including all of the time he spent in the Senate, which, honestly, feels like an eternity.

Thune says that the president’s current actions concerning Russia and Ukraine are maintaining that same pattern and notes that Russian President Vladimir Putin is reacting to the weakness he sees in Putin.

“National security is always something the American people care deeply about, particularly when there is a prospect of having to send young American men and women into harm’s way,” the South Dakota Republican went on to say during an interview on Newsmax’s “Spicer & Co.” Tuesday. “They are paying attention not only to the competence or incompetence, I should say, of this administration, but also to a sort of foreign policy formula that projects weakness.”

The Kremlin Wednesday announced new military exercises near the Ukraine border, while Biden is continuing to try to rally support to keep Russian President Vladimir Putin from staging an invasion into the neighboring country.

“Any time you project weakness, that’s what tempts our adversaries and people like Putin to play on it,” said Thune. “You can clearly see where he waited until President [Donald] Trump left office. When President Biden came to office, Putin started amassing troops on the Ukrainian border, and he’s testing this administration.”

There are many other hotspots around the world where American interests are at risk, and “the American people need to be concerned about an administration that doesn’t have a very good grasp on what they want to accomplish in terms of our national security and foreign policy,” Thune added.

Meanwhile, the White House has agreed to requests from Senate Majority Leader Chuck Schumer, D-N.Y., and House Speaker Nancy Pelosi, D-Calif., for bipartisan briefings on the Ukraine situation, and Thune said he thinks that is a sign that the congressional leaders are worried about what Biden has planned.

“This is an attempt provided to give cover, to give the administration hopefully a chance to sell members of Congress on this, but at least to say that, Well, we gave Republicans a chance to hear about what the administration intends to do,” Thune remarked. “But more than anything else right now, I think what the American people are seeing this feckless foreign policy, starting with the disaster in Afghanistan.”

Biden is definitely weak on foreign policy. The worst thing he probably said to Putin during their phone conversation was “Come on, man,” a phrase which the president thinks will magically convince anyone to jump on his side of an issue.