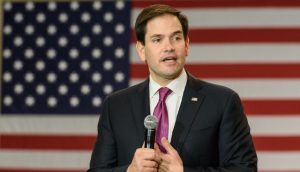 Florida Sen. Marco Rubio, a Republican, did not mince words when critiquing the actions taken by the Biden administration toward Cuba during the wake of the communist government’s attempts to silence pro-liberty protesters through arrests and mass trials.

Biden seems to be attempting to play neutral in this situation so that he doesn’t tick off the hardcore radicals who have similar worldviews to the one pushed forward by the communist government of Cuba.

”It’s like one of those three life sentences that people get, you know, the one is enough, and it’s already covered by it,” Rubio went on to say during his chat on ”Spicer & Co.” ”And so that’s what we’re facing here. It’s symbolic.”

”The problem is the Biden administration is getting its policy advice on Cuba, apparently, from a bunch of people in Miami, the same that who were in Havana and 2015, drinking mojitos at the bar at the government-owned hotels and celebrating with John Kerry, the opening of our embassy. And these are people that have long favored sort of an engagement with the regime over there,” he continued.

Protests erupted throughout the Caribbean island July 11, with thousands marching through the streets waving American flags and calling for ”Libertad” [Liberty].

The government responded with countless arrests and reports of mass trials for ”public disorder.”

Rubio, whose parents fled Cuba before Fidel Castro’s takeover, said the Biden administration has largely responded with platitudes, but little if anything substantive.

Rubio stated he believes the U.S. government needs to take action to help improve communications in Cuba so the citizens can be more organized and get vital information from the Internet.

”If we made the Wi-Fi at the U.S. Embassy in Havana open and a lot of people in Havana to use it. Could it not be relayed then throughout the island?” The Florida senator said. ”There’s actually a capability. Cubans are pretty innovative and creative. That’s just one aspect.”

”The other is using these radios that, they would have to be stronger than the ones that were used in Puerto Rico, because it can’t be over Cuban airspace, but could that be used at least to expand internet access in times of crisis?” He said.

”And the third is that, you know the VPN [virtual private network] subscription service for about $1 million. You can do three months of VPN coverage for Cubans who sign up for it and use it so they can evade some of these filters that are being put up and keeping them from accessing Instagram and social media and Facebook — the ways they’re sharing these videos with the world, and they’re talking to each other about political change in Cuba,” Rubio concluded.