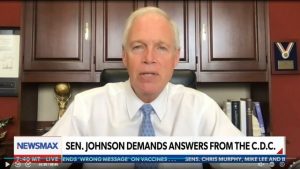 According to Sen. Ron Johnson, a Wisconsin Republican, medical professionals and officials working public health should not be in a “state of denial” that there are folks who are suffering from serious effects due to COVID vaccinations.

“I am pro-vaccine,” Johnson said during an interview on Newsmax’s “National Report.” “I was a big supporter of Operation Warp Speed. I acknowledge that more than 300 million doses have been administered, most of those without side effects. But I also don’t believe we should be in a state of denial.”

Johnson appeared on the show with Missouri dental hygienist Kristi Dobbs, who claims she has been suffering from a very wide variety of different ailments ever since she received the Pfizer vaccines back in January.

“I had an immediate reaction at the hospital clinic where the vaccine was administered,” Dobbs went on to tell Newsmax, pointing out that she was monitored for heart palpitations and high blood pressure and is still suffering from these conditions months after receiving the vaccine.

“I have tremors in my hands where I can’t keep my hands still,” Dobbs continued. “I have this internal vibration that feels like I have a cell phone stuck inside of me on vibrate all the time. (I have) extreme fatigue, brain fog, swollen lymph nodes, loss of appetite that caused weight loss, problems with temperature regulation, muscle pain, muscle weakness, unexplained skin rashes, and some problems with hypertension and blood pressure. (There are also) nocturnal nighttime convulsions, and irregular menstrual cycles.”

Johnson told Newsmax that people like Dobbs deserve to be taken seriously so that some injuries in the future can be avoided, and so that warnings can be put out about some of the potential dangers from the vaccines.

The senator said he’s sent letters to the Centers for Disease Control and Prevention and to the Food and Drug Administration in hopes of getting answers for people who have been adversely affected by the vaccines, saying those people feel abandoned by drug companies and federal health agencies.

“I understand we all want the pandemic to be over,” the senator said. “We’re all looking for that silver bullet, hoping that the vaccine will be it to end this pandemic … you shouldn’t cast aside these individuals that started experiencing symptoms within minutes.”

He added that he hopes the FDA does not rush into final approval of the vaccines, as their observation should take time to determine what impacts are taking place, so “we actually have the time to assess what is actually happening with the vaccines.”

One of the main reasons folks are so hesitant to take the vaccine is due to the fact that we do not understand the full effects they could have on our long-term health.

It’s pretty obvious that the vast majority of people in the United States are not anti-vaccine. Many support the development of vaccines to treat a number of different potential illnesses. However, they also advocate for more testing and patience when it comes to this COVID vaccine because so much about the vaccination itself, and the illness, is still unknown.