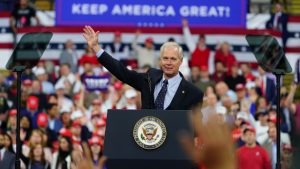 Sen. Ron Johnson, a Republican from the state of Wisconsin stated on Tuesday that President Joe Biden’s actions involving the troop withdrawal in Afghanistan are an “abysmal failure” and “jaw-dropping.”

Good words to describe the situation, wouldn’t you agree?

”For the president to come out and say this is an extraordinary success. I mean, what planet is he living on,” Johnson went on to state during an interview conducted with the folks on ”Eric Bolling: The Balance.” ”On planet Earth this was an abysmal failure. It’s just jaw-dropping to see the fantasy world that the president and this administration is living in.”

In a speech from the White House on Tuesday, Biden declared that the 20-year war in Afghanistan was over, and he praised those who helped with the evacuations since Aug. 14, when Taliban forces completed their takeover of the country by claiming the capital city of Kabul, causing a chaotic exodus of U.S. citizens, Afghan refugees and other foreign nationals.

”Last night in Kabul, the United States ended 20 years of war in Afghanistan — the longest war in American history,” the president stated. ”We completed one of the biggest airlifts in history, with more than 120,000 people evacuated to safety. That number is more than double what most experts thought were possible.”

”No nation, no nation has ever done anything like it in all of history,” he added. ”Only the United States had the capacity and the will and the ability to do it, and we did it today. The extraordinary success of this mission was due to the incredible skill, bravery, and selfless courage of the United States military and our diplomats and intelligence professionals.”

Biden said the Aug. 31 deadline to end the airlift was unanimously approved by his top military and civilian advisors to save lives at the time of the final drawdown.

”I was not going to extend this forever war, and I was not extending a forever exit,” Biden continued. ”The decision to end the military airlift operations at Kabul airport was based on the unanimous recommendation of my civilian and military advisors: the secretary of state, the secretary of defense, the chairman of the Joint Chiefs of Staff and all the service chiefs, and the commanders in the field.”

Johnson said that the military equipment left behind in the withdrawal, and now the thousands of unvetted refuges going to the U.S. and other countries, may pose an even bigger security risk than anything we were facing in Afghanistan.

The ”$90 billion of sophisticated equipment left behind for the Taliban, we have no idea what the long-term ramifications are in terms of terror,” Johnson proclaimed. ”The fact that we really don’t know who the people are that they evacuated out of Afghanistan. There were thousands of people who just happened to get into Kabul airport. They put them on planes, and they send it to third countries, and now they’re sending them to America.”