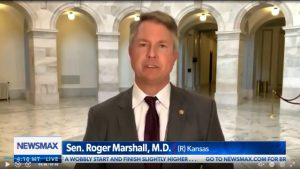 Dr. Anthony Fauci suggested over the weekend that mask mandates, even for those who have already been fully vaccinated, is something that is “under active consideration,” but according to Sen. Roger Marshall of Kansas, this is one of the many things that is causing vaccine hesitancy among those who have not yet taken the shots.

“When Dr Fauci says one thing, but he does another … it doesn’t make any sense,” Marshall, who also is a medical doctor, stated during his interview Monday on “Spicer & Co.” “Evidently doctor Fauci doesn’t believe in his own science.”

Proponents of bringing back masks cite the low vaccination rate and the spike in cases as the delta variant becomes more prominent. The variant is more contagious and deadlier than the original virus, according to experts, and breakthrough cases have been reported among the vaccinated. However, the vast majority of hospitalizations and deaths remain among the unvaccinated.

Marshall said the real purpose of new mask mandates is “to control people … this nanny state that the socialists want, so it confuses people.

“I see no reason that you should need to wear a mask,” he stated emphatically.

Marshall said he is not convinced for a need to mask-up in the first place, “but certainly there’s no added benefit unless you have some serious, serious underlying condition where your immune system is not functioning right.”

Masks don’t seem to really be working all that great, do they? Weren’t we supposed to expect an increase in cases as we switched to getting back to normal? I mean, people are going out and congregating together, it’s going to happen.

And weren’t vaccines supposed to make it safe to return back to normal or does the left keep moving back the goal posts?