Sen. Richard Shelby Announces He Will Not Seek A Seventh Term 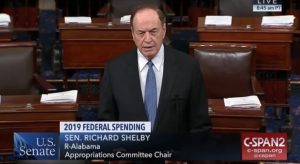 Republican Alabama Sen. Richard Shelby announced on Monday that he will not be seeking another run for reelection in 2022.

“Today I announce that I will not seek a seventh term in the United State Senate in 2022. For everything, there is a season,” Shelby said in a statement.

This is totally understandable considering the man is 86-years-old. I wouldn’t want to serve any more either at that point in my life. He’s done enough.

“Although I plan to retire, I am not leaving today. I have two good years remaining to continue my work in Washington. I have the vision and the energy to give it my all,” Shelby added.

Shelby did not state what he would be doing after his term ends, but in all honesty, if the man just wants to retire and rest, I think he’s earned it.

Sen. Rob Portman, a Republican from Ohio, also stated he won’t be seeking reelection in 2022.