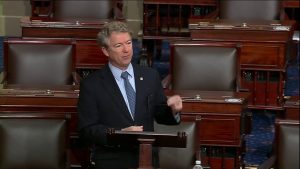 Kentucky Sen. Rand Paul had some strong words of condemnation for Dr. Anthony Fauci during a recent appearance he made on Newsmax, slamming him for his refusal to accept the science related to the coronavirus while also charging that the current Biden administration’s chief medical adviser “has no respect for freedom.”

Sitting down for a chat with the hosts of “Spicer & Co.,” Paul, who is also a medical doctor, stated that because Dr. Fauci ignores “the science of natural immunity he presses on. And because he has no respect for freedom — for individual freedom — he wants to push on to tell us and mandate what we must do in our medical lives. And so I think this is a terrible step backwards, and it’s ignoring the science, frankly.”

According to the Washington Examiner, Fauci appeared on CNN’s “State of the Union,” stating it was his opinion that there should be more mandates at the “local level.” However, the doctor left the statement open-ended, not specifying whether he was referring to a vaccine mandate, social-distancing mandate, or a mandate of another form.

Paul wholly disagrees with Fauci and think’s “Dr. Fauci is the ultimate elitist,” adding that rather than accepting the science of “natural immunity,” Fauci would rather have everyone “blindly submit.”

Other members in the medical community have also come out against the concept of mandates. Vaccine expert Geert Vanden Bossche,who has worked on vaccines for the Ebola virus, wrote a letter in opposition to his colleagues in the medical field over their biases regarding mRNA technology used in COVID-19 vaccines.

“It is clear,” Bossche says in a piece of writing to his colleagues, “that stubbornness and a blind indoctrination approach are not going to best serve this principle [of ‘respect and preservation of human life] unless they are willing to assume full responsibility by publicly declaring that the ongoing mass vaccination campaigns, especially using mRNA vaccines (!), will undoubtedly confer herd immunity and take control of the growing panoply of viral variants, including those that are now coming close to resisting current COVID-19 vaccines.”

Bossche then goes on to highlight that his colleagues are not acting ethically by continuing to push folks to take the vaccine without any regard for factors of “herd immunity.”