Sen. Rand Paul Continues Attacks On Fauci, Says He Demands ‘Onerous’ Coronavirus Rules For Citizens, But Not For Migrants 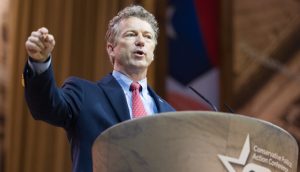 Sen. Rand Paul conducted an interview on Thursday with Newsmax where he stated that Dr. Anthony Fauci’s COVID border policies are “hypocritical” with “onerous rules” that have been created for U.S. citizens who are seeking to travel, but there are “no rules” in place for migrants who have come across the southern border illegally.

Fauci, President Biden’s chief medical adviser, recently stated in a White House press conference, which was featured on The Chris Salcedo Show, stated ‘there is testing at the border under certain circumstances.”

However, the Kentucky senator wasn’t having it.

”I think many of them are being stuck on planes or buses and sent to various parts of our country, and they could potentially be spreading a virus,” the Kentucky senator said.

The Biden administration does not require vaccination or negative COVID-19 tests for people entering the U.S. illegally through the southern border, according to the New York Post.

White House press secretary Jen Psaki defended the administration’s position on Sept. 20, stating that refugees from Haiti and Central America are ”not intending to stay here for a lengthy period of time.”

Paul also commented on the Mississippi abortion case being debated in the Supreme Court, which could eliminate the ”right to an abortion” federal precedent established in 1973 with the court’s ruling in Roe v. Wade, The New Yorker reported.

The law in Mississippi makes abortions after 15 weeks completely illegal.

”I think looking at [Chief Justice John] Roberts’ arguments today, and he often is a swing vote, at least in his discussion, it seemed as if maybe he was implying that, ‘Well, maybe we’re not going to overturn Roe v. Wade completely, but what’s wrong with 15 weeks?”’ Paul went on to state.