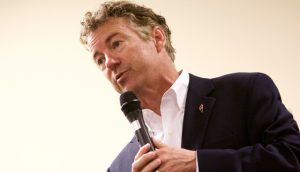 Sen. Rand Paul, a Republican from the Bluegrass State who recently released a report concerning the impact that coronavirus vaccines could have on the economy, applauded the decision made by the Occupational Safety and Health Administration (OSHA) to suspend its orders concerning the directive, going on to say this shows “sense and rationality” have finally come into play.

“This is also good news for workers across the country and for employers,” the Kentucky Republican went on to say during a chat on Newsmax’s “National Report.”

Paul then went on to add that he picked up on the irony that the Supreme Court’s decision concerning Obamacare that the “commerce clause cannot be used to tell people to buy insurance,” is likely going to be the same line of thinking used to make a ruling against vaccine mandates.

“This mandate cannot stand and won’t be enforced,” said the Kentucky senator.

In his report, Paul highlighted the economic cost of vaccine mandates in Kentucky, with reports about the rest of the states expected to be released on Thursday.

“Under President [Joe] Biden’s unlawful and unconstitutional vaccine mandates, Kentucky risks losing up to 34% of its labor force, not to mention it will cost Kentucky businesses at least $50 million,” Paul went on to state in the report.

“In a free country, people have the right to make their own healthcare decisions. President Biden’s command that working Americans and private businesses submit to his mandate upon penalty of loss of livelihood is a flagrant abuse of power that will destroy Kentucky’s economy and workforce,” the senator continued.

“I think the thing that people need to realize is people think, oh, you’re just telling people to do something,” said Paul during the intervieew on Newsmax. “They are losing their liberty, but they’re also losing economically by this.”

There are also people who have “had COVID already like me and who have immunity and don’t see the use or the need for being vaccinated,” said Paul. “Our report shows is that there are economic consequences for this. You know that the state and the people in the individuals will lose not only liberty, but they will lose in their wallets. They will lose their pocket … their means of sustaining their family, their economic livelihood.”

Paul also hit back at Dr. Anthony Fauci’s latest comments that booster shots may soon be included in the definition of being fully vaccinated.

“It’s long past time that we should disregard his mandates, his edicts, and his advice,” said the Kentucky senator, adding, “He thinks he’s the central authority. But when you have one central authority what you get is authoritarianism, and he should be completely discounted because he’s actually covering up many things. He’s covering up the science of natural immunity, but he’s also covered up the origins of this.”

You know that Fauci hates this man, especially because what he says is the truth. The man has somehow managed to make a successful career out of being totally wrong about pretty much everything.

And that goes beyond the coronavirus pandemic. Just look at the work he did during the height of the AIDS epidemic. It’s just as atrocious and badly done.

Someone needs to hold this man accountable for his horrifically bad work.