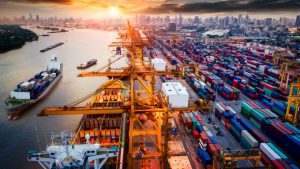 Sen. Mike Braun, a Republican from the state of Indiana, recently took an opportunity during a television interview to slam the Biden administration for their failure concerning the resolution of the supply chain crisis still rocking the United States.

Conducting an interview with the hosts of “Spicer & Co.,” Braun remarked that”the supply chain is not loosening up. And the reason is … pre-COVID, everything was working perfectly.”

”I mean, we had things humming in high gear and decisions from the Biden administration, calling [them] a one-man wrecking crew, has been to disrupt all of this: from the ‘mis-navigation’ through COVID, where you just disproportionately shut down the real economy, and then he tries to sell this sugar high of spending more money,” he went on to add.

Braun then continued to rant about the topic, making allusions to both the infrastructure legislation that was recently signed into law and the spending bill currently in Congress.

“We got together with a couple of groups today on how outlandish this thing is, in terms of how much debt it’s going to actually add over 10 years is closer to probably $2.8 trillion than $300 billion or so, because none of these programs ever get discontinued,” the senator said.

On Tuesday, Senate Majority Leader Chuck Schumer, D-N.Y., doubled down on the goal of passing the Biden administration’s spending bill before Christmas.

Appearing beside Braun, Sen. Roger Marshall, R-Kan., said: “I just don’t see [the bill’s passing before Christmas] happening. The biggest issues back home are inflation and vaccine mandates. I think America knows this is just going to add fuel to the fire, that this is an inflationary measure, the government printing more money.”

“The whole country’s feeling [the pinch of inflation], and we know that this ‘Build Back Better’ [bill] will create more inflation,” Marshall said.