Sen. Marsha Blackburn Slams Biden Administration, Says Taliban And America’s Other Enemies ‘Do Not Fear Us’ 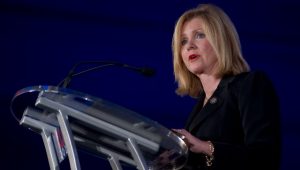 Sen. Marsha Blackburn delivered a serious burn to the Biden administration after stating that now that the Taliban has taken over Afghanistan, they will create a nation where it will be safe for terrorists to come to and “cook up” their sickening plots, and noted that due to the actions of the president, our other enemies no longer fear the United States.

“Our NATO allies are furious with this administration and how they’ve conducted this,” the Tennessee congresswoman went on to say during an interview on Newsmax’s “National Report.” “Our enemies do not fear us … our enemies are emboldened. The Taliban does not fear us. They now are in charge of a country and they are going to run their operations from that country. The world is less safe because of Joe Biden and the decisions that he has made.”

Blackburn then stated that reports that the Taliban is planning to install its government in Afghanistan on Saturday, which marks the 20th anniversary of 9/11 should deeply trouble “every single American.”

According to the reports, which have not been publicly confirmed, Afghanistan’s new interim government, led by Mullah Mohammad Hassan Akhund, is expected to be sworn in Saturday, and invitations have been sent to several countries — including the United States — to attend the ceremony, according to India.com.

“What has happened in those 20 years, is, God bless the men and women in uniform that gave those 20 years of freedom from these terrorist attacks,” Blackburn went on to say. “They gave the sacrifices that they have made, but the war on terror started and that war continues. The Taliban, the people that were carrying out this ideology of terrorism, al-Qaida, ISIS, the Taliban, they now have a country a nation-state where they can go, they can harbor, and they can have safe haven. They can cook up their terrorist plots. And they can do it saying this is the Islamic Emirate and we’re in charge.”

Blackburn also slammed a statement from Secretary of State Antony Blinken, who said there are limits on what the United States can do about the Taliban’s refusal to allow charter flights carrying Americans out of Afghanistan to leave.

The senator reiterated that she thinks Biden, Vice President Kamala Harris, Blinken, Defense Secretary Lloyd Austin, and Joint Chiefs of Staff Mark Milley all should resign for how they carried out the exit from Afghanistan.

“I think that their actions have been intentional, or why would they have decided to pull our military out?” said the congresswoman. “Why would they have changed the exit and withdrawal plan? But here’s the thing. They cannot tell you how many Americans are left there. I’m guessing they can’t tell you how many of the SIV holders are left. They’re guessing on that, and they should have taken care of these details. What they’re doing is basically running a PR campaign [while] trying to cover their tracks because Americans are left.”