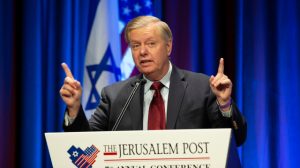 Sen. Lindsey Graham, a Republican from South Carolina, recently conducted an interview with the BBC where he stated that the return of U.S. military forces to Afghanistan is inevitable and will happen someday.

Graham made an appearance on the network’s “HARDtalk” program where he stated that President Joe Biden’s troop withdrawal, along with the re-emergence of the Taliban will ultimately demand that U.S. troops will go back to the country.

“We’ll have to because the threat will be so large,” Graham went on to say. “Why did we go back to Syria and Iraq? Why do we have 5,000 troops in Iraq today? [It’s] because of the caliphate rising, projecting force outside of Iraq, killing Americans, killing the French, attacking the British.”

“So, yes, it will be a cauldron for radical Islamic behavior. You cannot deal with this over the horizon,” the senator added.

Graham said that anyone believing that the Taliban have changed their ways for the better is misguided.

“Whether you like [former President Donald Trump] or not, whether you believe it’s Trump’s fault or Biden’s fault, here’s where we are as a world: The Taliban are not reformed, are not new,” Graham then stated. “They have a view of the world out of sync with modern times. They’re going to impose a lifestyle on the Afghan people that I think is going to make us all sick to our stomach.”

“Most importantly, they’re going to give safe haven to al-Qaida who has ambitions to drive us out of the Middle East and attack us because of our way of life. We will be going back into Afghanistan as we went back into Iraq and Syria,” he said.

The senator offered a plan to deal with the present situation and prevent the Taliban, al-Qaida, and ISIS from reigning terror on the free world.

“Help the resistance in the Tangi Valley. The Taliban will not be able to govern Afghanistan. They’re hated by the Afghan people,” Graham proclaimed. “What’s going to happen over time is you’re going to see the resistance rise, ISIS will come after the Taliban [big-time], and the entire country is going fracture in the next year, creating a perfect storm for Western interest to be attacked.”

“You can do one of two things. You can say, ‘That’s no longer my problem,’ or hit them before they hit you,” said the senator.

Graham went on to try and inform European audiences during the interview on how successful President Donald Trump’s policies were at combating terrorism.

“He destroyed the caliphate. It rose on [former President Barack] Obama and Biden’s watch and Trump sent the military in to destroy it,” Graham said. “When he left, there were 2,500 U.S. soldiers on the ground with NATO allies. They’re no longer there.” he said, adding, “He killed [Iran’s Qassem Soleimani], which I think is a good thing. He rebuilt the military in a fashion where we could be effective all over the globe. The deterioration of the military during the Obama years was real.”

Something needs to be done right now to help rescue our people from behind enemy lines. It’s unbelievable that the incompetence of the president has caused this very awful, and very avoidable situation.

Pray for our people still trapped in Afghanistan.