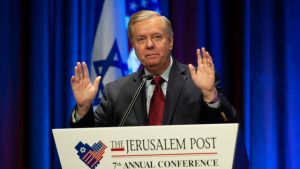 That’s an interesting way of putting it.

“There’s only one option available to America: Fight the war in the enemy’s backyard, and not ours, partner with people who are willing to fight with you,” Graham went on to say during his conversation Monday on “Eric Bolling: The Balance.”

“Joe Biden has put America at risk. He’s doomed tens of thousands of people to a terrible death. There’s one person to blame here above all others. That’s President Biden,” he went on to add.

Graham seemed to really get passionate after show host Eric Bolling showed a CNN video clip of a radical jihadist saying he would not back down from trying to spread radical Islam all over the planet.

“When you hear of [the] Taliban, think of al-Qaida. When you hear al-Qaida, think of 9/11,” Graham went on to tell Bolling, also stated that the Taliban can’t be trusted to keep terrorists from rising up in Afghanistan and waging another jihad on the U.S. sometime later on.

“It was all avoidable. There’s nobody to blame. Trump had a conditions-based withdrawal. Joe Biden turned down sound military advice yet again, and what you see is what you see,” Graham said.

Most egregious in the Taliban takeover, Graham added, was the release of “homicidal” maniacs determined to kill in the name of their radical version of Islam.

“By releasing these prisoners, you’ve let out thousands of hard jihadists — some foreign fighters — who will not only secure Afghanistan under medieval conditions, they will be coming after us,” Graham continued.

The saving grace for the United States is that Afghans do not trust their new Taliban leaders and will potentially rise up against them.

“The Taliban are hated by the Afghan people,” Graham said finishing up. “There’s going to be pushback, and we need to empower that pushback.”

“Here’s the good news: Most people in Afghanistan are not buying this. We need to help them because it helps us. If you leave these people alone and let them gather up, we’ll get hit with another 9/11,” the senator said.