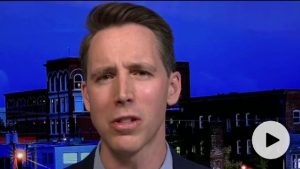 Sen. Josh Hawley made an appearance on Fox News Monday evening where he said that “Antifa scumbags” came to his home in Washington, D.C., and proceeded to threaten his wife and their newborn daughter while he was away in Missouri, their home state.

Hawley has gained a lot of notoriety the last week or so, as he’s become the first GOP senator to step forward and announce plans to object to Electoral College certification of Joe Biden as president.

A video was captured of “protesters” outside of his home, criticizing him for daring to stand up in an attempt to preserve the integrity of our election system and question the official narrative.

“They screamed threats, vandalized, and tried to pound open our door,” Hawley stated as he described the situation.

Mike DeBonis, a reporter from The Washington Post, tweeted that the group involved was ShutDownDC, which defines itself as “an organizing space where individuals and groups can come together to organize direct action in the fight for justice.”

The group called the visit to Hawley’s home an “hour long vigil” to demand that “he drop his baseless contestation of the 2020 presidential election results.”

A statement from the group said, “Activists lit candles and delivered a copy of the U.S. Constitution” to the senator’s home. The group’s website posted a photo of a man holding a bullhorn standing outside homes in a residential neighborhood.

The group responded to Hawley’s tweet saying that it is “absolutely and unapologetically anti-fascists.”

The fact these thugs call themselves “anti-fascist” while practicing many of the same tactics used by fascist brown shirts in Nazi Germany is a crash course in irony.

Hawley is proving that he has more of a spine than just about everyone in Congress, really putting his own neck on the line to uncover the truth about voter fraud and ensure the American people aren’t snowed over in this very clearly rigged election.