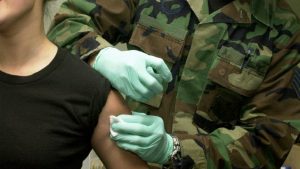 Sen. Jim Inhoffe, who is the current ranking member of the Senate Armed Services Committee, has written a letter urging the Department of Defense to get rid of its vaccine mandate.

The letter, addressed to Defense Secretary Lloyd Austin, is calling on the Pentagon to trash the “haphazardly implemented and politically motivated vaccine mandate,” despite the large number of individuals in all branches of the armed forces already being vaccinated.

Each military branch has its own deadline for compliance to the vaccine mandate for active-duty and reserve troops. The Air Force’s mandate for all active airmen to get vaccinated by Nov. 2 is the earliest for the military.

“At a time when our adversaries continue to increase their quantitative and qualitative advantage against our forces, we should seek to ensure that no policy, even unintentionally, hinders military readiness,” Inhofe said in a letter Monday. “Most troublesome is the lack of clarity and consistency among the services as they look to implement the administration’s hasty vaccination mandate. Combined with the uncertainty and burden the vaccination mandate places on industry, this administration will do more damage to the nation’s security than any external threat.”

Inhofe’s letter comes as each military branch has at least 85% of all active-duty troops partially or fully vaccinated.

As of Oct. 12, 95.9% of active-duty airmen are either fully or partially vaccinated. Just one day later, the Navy reported 94% of sailors had received at least one dose of the vaccine. Similarly, 85% of the Marine Corps and 90% of the Army have been vaccinated as of Oct. 7, according to Military.com .

As of this writing, the Navy Reserve is sitting at 68 percent of troops vaccinated, along with the Air Force Reserve. The Army and Marine Corps reserves are both around 40 percent as of early October.

Soldiers who are refusing to get vaccinated are able to apply for a religious or medical exemption. However, if neither one of these is approved and the soldier still won’t get the vaccine, they could potentially be removed from the service among other consequences.

Inhofe finished up his letter by saying he wants to hear back from Secretary Austin by Nov. 1.