Sen. Hawley Rips Biden’s Claim Infrastructure Has Bipartisan Support, Says No One In GOP Supports ‘Socialism’ In The Plan 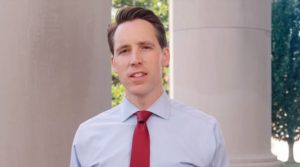 President Joe Biden has stated that his massive $2.3 trillion infrastructure plan has bipartisan support on a national scale, even if the GOP on Capitol Hill won’t back the legislation.

Sen. Josh Hawley, a Republican from Missouri, stated on Tuesday that he wants to know who has been chatting with President Biden and telling him they like the bill and the “socialism” it has in it.

“I don’t know what Republicans that President Biden is talking to across the country, but it’s nobody who lives in Missouri,” Hawley said while conducting an interview on Fox News program “Fox and Friends.” “I can’t imagine that there is Republican support for bringing socialism to America, which is basically what his plan is.”

Biden has proposed $4 trillion in new big government spending between his infrastructure bill and a family bill over the past month, and that comes on top of the almost $2 trillion that has been spent this year, Hawley said.

“He’s mortgaging everybody’s future in order to do what, fund a bunch of liberal pet projects, cancel energy jobs, let China run away with the global competition?” Hawley stated. “It’s crazy stuff that he’s proposing to do, and I don’t think there’s any broad-based support for it certainly not among Republicans or independents.”

Pretty sure that Biden is off his meds again if he thinks any true Republican is going to support an infrastructure plan that is primarily compromised of leftist wish list items that will help aid the progressive transformation of America from a republic to a socialist nightmare.