Sen. Ernst Says She’s Not Sure US Will Be Able To Pull All Americans Out Of Afghanistan 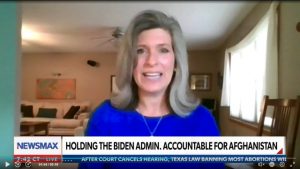 Sen. Joni Ernst stated on Monday that the Biden administration has “shown weakness when our country needed to see strength” during the evacuation of American military members and citizens, along with Afghan allies, from the country of Afghanistan by the end of the deadline tomorrow evening, noting that she’s not positive we will get all of the Americans there out of the country.

“I don’t know that we will get all of our Americans out nor our Afghan allies, our partners,” the Iowa Republican stated during a conversation on Newsmax’s “Wake Up America.” “This incompetent administration has allowed this to happen, so what we are depending on at this point in time is not only our military to extricate Americans and partners but also non-governmental organizations, charitable groups. We have all kinds of underground organizations coming forward to rescue American citizens.”

Meanwhile, the Taliban has said it will allow Afghans to leave the country on Aug. 31 on commercial flights, but Ernst agreed that it’s not likely that airlines will be willing to fly into Kabul, and she said the Taliban can’t be trusted to keep its word, considering all it’s done over the past 20 years.

“They have provided safe harbor for terrorist organizations like al-Qaida and many other violent extremist organizations,” Ernst went on to say. “To think that we would put our Americans’ lives in the hands of the Taliban is extraordinary. I can’t believe that our government is doing this. We do need to make sure we’re providing safe passage, and the Taliban will not do that.”

The senator also said she’s concerned that any Americans left in Afghanistan will be “sitting ducks” for the Taliban.

“We are relying on retired special operators, again, charitable organizations, to extricate Americans through underground railroads,” the congresswoman said. “This is absolutely unacceptable. It is a failure of our federal government. God bless those that are willing to put their lives on the line to get those Americans and our partners out.”

If we cannot bring every single American from overseas, then there needs to be some sort of action taken to hold Biden accountable for the mess he made. This means impeachment or resignation.