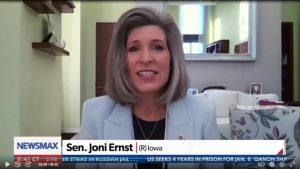 Sen. Joni Ernst ripped into President Joe Biden, stating he didn’t only “not find his backbone,” during his call with China’s President Xi Jinping this week, but he actually “gave his backbone away” by not stepping up to the plate and demanding answers concerning the origin of the coronavirus.

“We did not get the answers we were demanding that are on the forefront of every American’s mind,” the Iowa senator stated during an interview on Newsmax’s “Wake Up America.” “We need to get to the bottom of this. We need to know it because we need to prevent any future occurrences of pandemics like this.”

Biden and Xi spoke for more than three hours through a video link, discussing trade, human rights, and more, according to a White House readout, but didn’t discuss the COVID origins, which has angered conservatives.

“The president didn’t even push to get the answers we need,” said the Iowa Republican. “Issues were not addressed and again, the president really needs to start standing up for the United States rather than giving away the farm to China.”

She then said there’s “nothing wrong” with being mad over the actions taken by China.

“We as Americans should be very angry about the way China treats not only our great country but also its neighbors and other communities around this globe,” Ernst stated.

The Iowa senator then said that President Biden had a golden opportunity to make it clear to the Chinese president that the U.S. will not tolerate the kind of actions taken by China, which includes testing out hypersonic missiles or invading the country of Taiwan.

“He had the opportunity to demand answers, and he failed,” she said.

The leaders of countries do need to have dialogues, she continued, but to simply shake hands and make nice of everything — that’s simply not the way it is with communist China.”

“We know they’re a nefarious actor,” said the senator. “We need to push back against them. Many of our allied nations and other countries around the world look to the United States for leadership. Joe Biden is failing in all aspects of this.”

Meanwhile, Ernst is working on a bipartisan bill that if passed will lead to the formation of a 9/11-style commission to investigate the origins of the COVID-19 pandemic.

“I am joined in this effort by Sens. Dianne Feinstein and Kirsten Gillibrand, both Democrats, as well as Roger Marshall of Kansas, a Republican,” she concluded. “Not only do Republicans want to know how this pandemic started, where it originated, and how it happened, but we also have Democrats that are joining us in this effort. It is that important, and on this commission that Republicans and Democrats would have equal footing.”