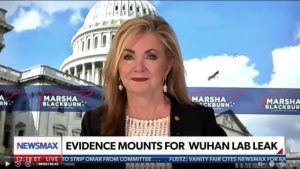 Sen. Marsha Blackburn recently stated that the American Dream and Promise Act, also known as H.R. 6, has several big problems due to the fact that it offers blanket amnesty for all immigrants and just the “Dreamers.”

“The bill does have problems if you’re going to give amnesty to three million people, not just the 650,000 that are involved in the DACA program,” the Tennessee Republican went on to say during a chat she had with Newsmax’s “John Bachman Now.” “If you’re just going to do blankets and say okay, we’re going to cover everybody, then think about who all gets included in this.”

The bill, as it is currently written, gives citizenship not only to individuals who came to the U.S. as children and are covered under the Deferred Action on Childhood Arrivals program, which was put into action back in 2012, but also for people who have temporary permission to remain in the United States.

The problem here, said Blackburn is that there are people who are criminals who would then be granted citizenship as a result.

Blackburn also commented on a video from Sky News in Australia that shows bats inside the Wuhan Institute of Virology, after claims had been made that there were no bats in the giant Chinese laboratory and that the COVID-19 pandemic must have begun outside the facility.

“It’s amazing what we’re beginning to find out about the Wuhan lab and how this theory was just punted aside,” Blackburn continued, adding, “You had big tech, big media, all saying, oh, there is no there there. You had people at the State Department, the career bureaucrats that were trying to push against investigating the lab, and then also, they were all pushing this wet market theory and it’s all falling apart on them … the truth generally comes out sooner or later.”

The video was taken in May 2017 by the Chinese Academy of Sciences and unearthed by a group of scientists known as DRASTIC that has been investigating the theory that the COVID-19 pandemic was sparked by a leak from the lab. The footage, shot inside the lab, shows live bats being held there and even shows one bat hanging from a worker’s hat.

Dr. Peter Daszak, a member of the World Health Organization (WHO) investigation team, has denied the presence of bats in the lab.

Well, we all know how badly the Biden administration wants to help illegal immigrants, regardless of whether or not they are criminals, be able to vote in upcoming elections, so I guess this legislation fits perfectly with their plan.