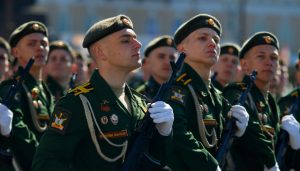 United States Secretary of State Antony Blinken started ringing alarm bells on Thursday during his statement to the United Nations Security Council as he issued a warning that Moscow could be preparing to take military action to invade Ukraine in the “coming days.”

Blinken then accused Russia of making plans to cook up some sort of pretext for an attack on Ukraine that could include a “fake, even a real, attack using chemical weapons,” before going on to say that “Russia may describe this event as ethnic cleansing or a genocide.”

“The Russian government can announce today, with no qualification, equivocation or deflection, that Russia will not invade Ukraine. State it clearly. State it plainly to the world, and then demonstrate it by sending your troops, your tanks, the planes back to their barracks and hangars and sending your diplomats to the negotiating table,” Blinken stated.

He then made an appearance at a meeting of the 15-member counsel concerning the Minsk agreements, which were designed to end an 8-year-long conflict between the Ukrainian army and separatists backed by Russia in the eastern part of the country.

The meeting came amid high tensions after the United States accused Russia of deploying some 150,000 troops near Ukraine’s borders in recent weeks. Russia has said it has no plans to invade Ukraine and accuses the West of hysteria.

Blinken said U.S. information indicated that Russian forces “are preparing to launch an attack against Ukraine in the coming days.” He said he has asked Russian Foreign Minister Sergei Lavrov to meet in Europe next week.

Speaking before Blinken, Russian Deputy Foreign Minister Sergei Vershinin appealed to council members not to turn the meeting “into a circus” by presenting a “baseless accusation saying that Russia allegedly was going to attack Ukraine.”

“I think we’ve had enough speculation on that,” Vershinin commented. “We have a long ago clarified everything and explained everything.”

A senior U.S. administration official had earlier warned on Thursday that Russia could use the Security Council meeting as part of a bid to “establish a pretext for a potential invasion” after Russia circulated a document to council members, alleging that war crimes had been committed in southeastern Ukraine.

The U.S. official then went on to reject the Russian claims as being “categorically false.”

Making a reference to the ethnic Russians who are living in the eastern part of Ukraine, Vershinin went on to say that they “are still presented as foreigners in their own country” and are being targeted by the Ukrainian military. He then told the members of the council that they would be “horrified” by the document that Russia shared with them.

“Earlier on Thursday, Russian-backed separatists and Ukrainian government forces traded accusations of firing shells across the ceasefire line in the Donbass region of eastern Ukraine, in what Kyiv said appeared to be a ‘provocation,'” the report stated.

“Yaşar Halit Çevik, chief monitor of the OSCE Special Monitoring Mission in Ukraine, told the Security Council that while some 500 explosions had been recorded overnight, ‘the tension may seem to be easing,'” the report continued.

The U.N. Security Council has apparently met dozens of times to talk about the Ukraine crisis ever since Russia decided to annex the Crimea region back in 2014. However, it can’t take any action due to the fact that Russia, along with France, Britain, China, and the U.S., have a veto-power.