Sec. Mattis on Synagogue Shooter: “I Won’t Even Call Him a Man” 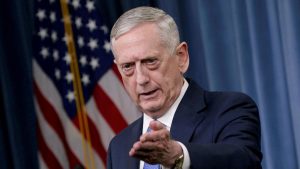 It is indeed a coward who opens fire on a group of peaceful worshippers, a person who can’t even face his perceived enemies on a level playing field and instead attacks people he knows full well have no chance at defending himself.

If anyone knows what a real man looks like in the current administration, it’s probably “Mad Dog” Mattis, former Marine Corps General and Trump’s Secretary of Defense.

Here is a man who has spent his lifetime facing his enemies dead-on, and has become pretty famous for his quotes on the subject.

He once even faced a group of enemy insurgents unarmed, and, legend has it, told them “I come in peace. I didn’t bring artillery. But I’m pleading with you, with tears in my eyes: If you f*** with me, I’ll kill you all.”

So when he was asked about the cowardly human scum who killed 11 and wounded 6 mostly elderly, peaceful worshippers during Saturday services at Philadelphia’s Tree of Life Synagogue, he didn’t mince words.

During his travels in the Czech Republic, reporters asked the Sec. Def, for comments on the shooting, to which he replied:

“This individual — I won’t even call him a man — he’s the poorest excuse for a man you could ever come up with. Who would use a weapon in a house of worship, on unarmed innocent people and even shoot four policemen, then surrender himself,” according to Military Times.

“This is a coward. He is not a man by any definition that we use in the Department of Defense.”

Amen to that, Mad Dog.

Sec. Mattis also stressed that the US military is both representative of, and committed to protecting, the religious diversity for which America ought to be a haven.

“The U.S. military — what I expect from our troops and what I see of them — is men and women working respectfully alongside each other, people who look at other people’s religion as a private matter to be respected,” he said.

“The U.S. military, I believe, represents what it’s all about in America where you work together to solve things. But also in the U.S. military, our job is to protect this democracy. We’re devoted, focused like a laser beam, on that.”

He also noted that the shooting was particularly painful for “all of us who believe in freedom of religion as one of our most fundamental rights that our country was founded on.”