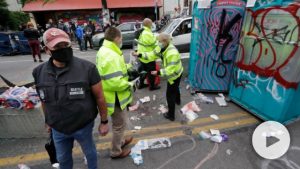 Seattle law enforcement has finally managed to take back the East Precinct located in the CHOP zone, a six-block radius of the downtown area of the city. Mayor Jenny Durkan finally declared the gathering of protesters — many of which have caused havoc and violence for residence who live within the zone — an unlawful assembly.

Police gave the protesters a nice little wake up call at 5 a.m. Wednesday morning, telling the folks camped out in the area they had exactly eight minutes to clear out. There were 13 arrests made for individuals who weren’t out of the zone after being issued multiple warnings.

It’s about time. This whole situation went on far too long. Look how quickly the police managed to mop up these folks. There was no excuse for taking a month to get this done.

The East Precinct, which police abandoned last month following standoffs and clashes with demonstrators, was cleared of protesters, Police Chief Carmen Best told reporters from inside CHOP. Best said police were not moving into the building yet, but would clean the area and precinct before beginning operations as soon as reasonably possible.

As officers in riot gear performed the predawn sweep to clear holdouts from the streets, police said a woman apparently went into labor on the east side of Cal Anderson Park inside the CHOP. Seattle Fire said it was responding to the scene.

Police officers on the scene also investigated several vehicles that were circling around the CHOP area after it was noted that there were people inside them carrying guns and sporting body armor. There were no visible license plates on the vehicles.

The orders from Durkan arrived after several major late-night shootings in the zone that resulted in the deaths of two teenagers. Three other individuals were seriously wounded. And to think, this could have been avoided had police been allowed to do this sooner. The blood of those kids is on Durkan’s hands.

Some of the violence in and armed individuals in the CHOP have been captured by open source video recorded in the area: https://t.co/PCTaMtqntr

How tragic and sad that a mayor with no spine allowed the violence and unrest to continue unchallenged for so long, resulting in a loss of lives. Voters should never forget this lack of intestinal fortitude and ensure that Durkan answers for her inaction by not being reelected as the mayor of the city come election time.