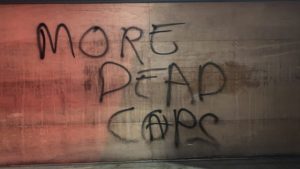 Seattle law enforcement made four arrests on Monday evening, as more violent protests exploded through out the city near the Capitol Hill area.

Officers who work for the Seattle Police Department stated that they witnessed firsthand “members of a protest” do serious damage to a KeyBank location in the 1600 block of Broadway sometime around 8 p.m.

The group of “peaceful protesters” — insert an eye roll here — smashed out windows at a local Starbucks in the 800 block of 12th Avenue before officers were able to move in and made the initial three arrests. One individual was taken into custody for damaging property, while the other two were taken in for obstructing a police officer.

The group continued to march through the streets and caused more property damage to businesses and residences, the police department said in a press release. A fourth person was arrested for property damage before the group returned to Cal Anderson Park.

Photos released by police showed shattered windows at the Starbucks and the message “F— Up Dirty $” spray-painted on an ATM outside KeyBank. Buildings were tagged with slogans supporting Black Lives Matter as well as calls for anarchy, arson and violence against cops.

Another phrase seen in graffiti was “Land Back,” a nod to a liberal indigenous sovereignty movement that usually receives attention around Thanksgiving celebrations as some Native Americans instead call for a counter-protest dubbed a National Day of Mourning.

Okay, so this nonsense has been going on since May when George Floyd was killed while in the custody of officers working out of the Minneapolis Police Department.

Law and order needs to be reestablished. Police need to be allowed to do their jobs and lay down the hammer in order to let folks know this is not an acceptable form of “protest.”

The people of the city no doubt feel their lives and livelihood are being threatened by these hooligans. It’s up to local leadership to provide protection.