Searches For ‘Can I Change My Vote’ Surge On Google After Final Debate. This Is Where You Can.

After the second and final presidential debate aired last Thursday, searches for “Can I change my vote” spiked on Google. This is a pretty significant trend since almost 62 million ballots have already been cast in this election, thanks to early poll voting, mail-in ballots, and absentee ballots, with seven days still to go until Election Day.

The initial spike in Google searches occurred Tuesday morning, when President Trump posted on Twitter that voters could change their votes in some states.

Here’s what those spikes look like in Google searches for “Can I change my vote”: 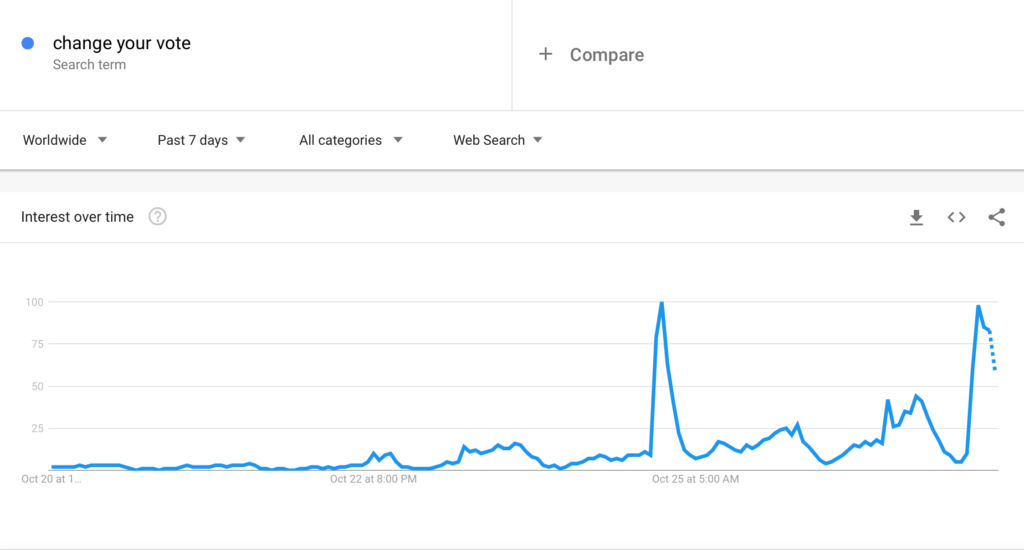 In some states within certain parameters, Trump is correct: You can change your early vote.

“Even if you request or cast and return an absentee ballot, you may still go to the polls and vote in person,” says the New York State Board of Election.

“The Election Law recognizes that plans change. The Board of Elections is required to check the poll book before canvassing any absentee ballot. If the voter comes to the poll site, on Election Day or during early voting and votes in person, the absentee ballot is set aside and not counted,” the board continues.

If you’re curious as to whether or not your local elections office will allow you to change your vote, be sure to contact them and ask.

Also, if you’re a citizen of one of the states listed above, you can visit the source link to the Daily Wire where some further information is available on the laws concerning the ability to change your vote.