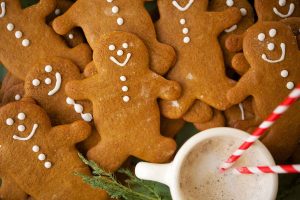 Tell me this isn’t the dumbest story you’ve heard all day.

Ok, so considering it’s 2018 and the world has gone insane, there’s a good chance you’ve heard a dumber one, but still, this has got to be in the top five, right?

Scottish Parliament, the governmental entity charged with, you know, governing Scotland and whatnot, has officially banned Gingerbread Men from their Parliamentary coffee shop to be replaced with the far more appropriate Gingerbread Person.

Holyrood, Scotland, where Parliament is located, recently learned through research that 30% of female ministers had experienced some form of sexual harassment. It was then deemed necessary to change the classic “gingerbread man” to a less offensive non-binary character. “A tradition festive favourite with children, Holyrood will now stock gingerbread persons as part of an increased focus on gender neutrality,” according to The Irish Post.

It is certainly believable that 30% of female ministers have experienced some form of harassment.

What is far more difficult to believe and I’d certainly like to see some data for is when, in the history of all humanity, has a man somehow felt his toxic masculinity empowered by a gingerbread man and gone off to grab a lady’s tush or tell an inappropriate joke around the water cooler.

Apparently, there is still some common sense left in the world, and plenty of people thought this was a waste of bloody time.

Annie Wells, Scottish Conservative Equalities spokesman, was not pleased. “Surely the Scottish Parliament has got better things to do than worry about what to call gingerbread men?” she asked. “This is an utterly pointless gesture which simply trivialises the real issues of gender equality.”

Ricky Gervais also had something to say on the matter: “Why are they ALL ginger? Racist.”

Why are they ALL ginger? Racist.

Next thing you know, they’ll be calling for a gender-neutral Santa.