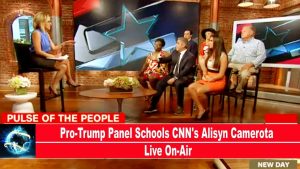 It’s just gotten ridiculous! CNN featured a panel of six Trump supporters Wednesday morning and they all pushed back on host Alisyn Camerota’s persistent argument that somehow President Trump did something wrong by condemning both sides for violence and hatred following the protests in Charlottesville.

The entire panel defended President Trump and expressed their distrust of the media.

“I didn’t see anything wrong with it. I mean he addressed the problem. I mean let’s face reality, there are problems on both sides,” said one of the panelists.

Camerota was clearly frustrated that anyone would come to such a logical conclusion so she pushed back.

“Do you think neo-Nazi’s and white supremacists are the same as those who are protesting them?” asked Camerota.

Really Alisyn? Prepared to get embarrassed in 3…2…1…

“I think it’s ridiculous to have me choose between Hitler and Stalin which is what I consider what both groups are,” the panelist shot back!

The hits kept coming. Camerota once again stuck up for the violent communist Antifa members and got shut down again.

“The Antifa group to me is totally Stalin-ish. If you’re willing to set fires and burn places to the ground, that doesn’t seem like a very peaceful group to me,” the panelist said.

Camerota played a clip of white supremacists chanting slurs against Jews and the panelists pointed out that the majority of Trump supporters do not share those views. There are over 60 million Trump voters, why does the media continue to show a handful of neo-Nazi’s as a representation of the entire voter base?

Camerota continued to demonize the white supremacists and romanticize violent, masked Antifa while the panel destroyed her narrative. The panel said they simply don’t trust the mainstream media. They get their news from alternative media and of course Camerota attempted to discredit that as well.

You can see the video below.

If you’re wondering why Nazism is always hated while the MORE violent Communism seems to often get a free pass here’s a little education for you from Prager U.