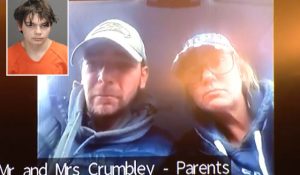 A prosecutor involved in the case of a Michigan teenager who opened fire on several of his classmates, killing four and injuring seven others, has revealed that the 15-year-old suspect’s parents have now been charged with involuntary manslaughter in the incident, going on to state that their actions earlier in the day went “far beyond negligence.”

Oakland County Prosecutor Karen McDonald said that the parents of Ethan Crumbley were called into Oxford High School the same day the shooting took place after a teacher found a drawing of a gun, with a person bleeding and having the words “help me” on it.

The gun that was used in the incident was bought by Crumbley’s father, James Crumbley, a week ago and was given to his son.

Ethan Crumbley was returned to the classroom after the meeting between officials and his parents. Later that same day, he emerged from a bathroom and started shooting at his classmates.

The prosecutor revealed that Jennifer Crumbley sent her son a text message saying, “Ethan, don’t do it.”

Here’s more from Newsmax quoting an earlier story from the AP:

A prosecutor in Michigan filed involuntary manslaughter charges Friday against the parents of a boy who is accused of killing four students at Oxford High School, after saying earlier that their actions went “far beyond negligence.”

“The parents were the only individuals in the position to know the access to weapons,” Oakland County prosecutor Karen McDonald stated on Thursday. The weapon used in the shooting “seems to have been just freely available to that individual.”

Ethan Crumbley, 15, has been charged as an adult with two dozen crimes, including murder, attempted murder and terrorism, for the shooting Tuesday at Oxford High School in Oakland County, roughly 30 miles (50 kilometers) north of Detroit.

Parents are rarely ever charged in connection with school shootings in the United States, even despite the fact that many of the minors who commit these crimes get their weapons from their parents’ homes or from some other relatives.

And currently, there’s no law in the state of Michigan that requires gun owners to actually keep their firearms locked away from their kids. McDonald, however, went on to suggest there’s more than that to build a case against the parents on.

“All I can say at this point is those actions on mom and dad’s behalf go far beyond negligence,” she stated during an interview with WJR-AM. “We obviously are prosecuting the shooter to the fullest extent. … There are other individuals who should be held accountable.”