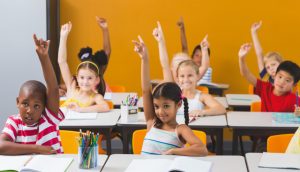 If you are looking for another excuse to use to justify homeschooling your kid or at least abolishing the Department of Education and making schooling a local, and private industry, an elementary school in Cupertino, California is providing you with all you need.

A teacher who instructs third grade students at a local school in Cupertino instructed students to deconstruct their sexual and racial identities and then make rankings that are based on their “power and privilege.”

Folks, if you don’t think liberals are indoctrinating your children, you must have your head stuck up somewhere smelly, moist, and dark.

The majority of families at the school are Asian-American, and the parent who led the protest against the intersectionality curriculum was Asian-American. The group of families confronted the principal, which ultimately caused the school to suspend the program, as Christopher Rufo reported.

One parent told Rufo, “We were shocked. They were basically teaching racism to my eight-year-old.” Another stated, “We think some of our school board members are [critical race theory] activists and they must go.”

While teaching a math lesson to students, the third grade teacher told them to create an “identity map.” The map was intended to delineate their race, class, gender, religion, family structure, among other features.

“The teacher explained that the students live in a ‘dominant culture’ of ‘white, middle class, cisgender, educated, able-bodied, Christian, English speaker[s],’ who, according to the lesson, ‘created and maintained’ this culture in order ‘to hold power and stay in power,'” Rufo said.

Then the teacher started to use a book that was called, “This Book is Antiracist” in order to help impart the lessons to her students.

“Those with privilege have power over others,” the book states. “Folx [folks] who do not benefit from their social identities, who are in the subordinate culture, have little to no privilege and power.” A specific passage in the book says,“a white, cisgender man, who is able-bodied, heterosexual, considered handsome and speaks English has more privilege than a Black transgender woman.”

The teacher then provided the children with example paragraphs that made references to nonbinary sexuality and transgenderism. Again, this is what indoctrination looks like. The origin of this twisted worldview is ripped straight from Karl Marx.

This is what children are being taught in public schools. It’s past time to strip away the government element behind education and make schools a private affair. This will allow for competition and wider variety of facilities that will enable parents to choose schools that will teach values and principles they hold to.